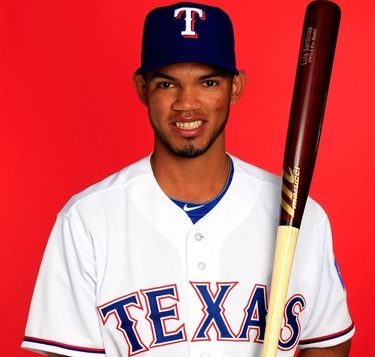 Luis Alexander Sardiñas was one of the pieces received by the Brewers when they traded Yovani Gallardo to the Texas Rangers last month. The others — a very green, painfully young, fireballing starter and a young reliever with MLB experience and a late-inning relief profile — came as no surprise. The starter is a standard get in deals moving a veteran starter like Gallardo.  The reliever is something that Brewers general manager Doug Melvin covets, and could potentially fill a 25-man roster need this year.

Even the trade itself wasn’t that much of a surprise. I had caught wind that the Brewers were on the verge of trading a starting pitcher early in January and then in what I thought might have been an unrelated tidbit, I had heard that something “big” was on the verge of going down with the Brewers. Turned out it was the same thing as Gallardo was on the move.

And despite the speculation that Sardiñas could be coming to Milwaukee since the Rangers had offered him in other deals this off-season, it was still a pleasant surprise. I was concerned when Gallardo was moved that the return wouldn’t be much to speak of. I was pleased when Marcus Diplan and Corey Knebel (the two pieces respectively referred to above) were announced. Not knowing anything about the Rangers’ farm system beyond a couple of guys, when I didn’t see Sardiñas on any current prospect lists, I was disappointed. I thought “The Brewers already have light-hitting utility guy a couple of times over in the system.”

Then, I started proper vetting and became more and more pleased as I found piece after piece about Sardiñas’ defensive skills, his contact rate, that he’s a switch-hitter, that he’s a true shortstop, and that he’s just 21 years young and already spent some time in the big leagues with Texas. More over, when I read that the reason Sardiñas wasn’t on those top prospect lists was because he no longer qualifies as a rookie, I was sufficiently sated.

Sardiñas was signed as an international free agent in 2009 when he was just 16 years old. He received a $1.2 million signing bonus. He came over to the states as soon as he was able to in 2010 playing in 26 games for the Rangers’ Arizona League team. He hit .304/.363/.350 and was squarely on the prospect radar of Baseball America who billed him as the Rangers’ #13 prospect after 2009 and #8 after 2010. Injury shortened his 2010 season and limited his 2011 season as well with Sardiñas playing in just 14 games in the Arizona League. For what it’s worth, he improved his slash lines over 2010.

Just 20 years old in 2013, Sardiñas split time with Class-A Advanced Myrtle Beach and Class-AA Frisco. He combined to hit .288/.340/.347 that season with the bulk of his plate appearances (432-to-141) coming at High-A. The numbers were significantly different between the levels but an adjustment period is often a necessity. Baseball America was up to #6 in Texas’ system, MLB.com checked in with Sardiñas at #76 overall in baseball and Baseball Prospectus actually moved ahead of MLB to list him as their #72 overall prospect in the game.

Then in 2014, Sardiñas’ time had come. Injuries to Elvis Andrus and Jurickson Profar resulted in promotions for both Sardiñas and eventually Rougned Odor. Sardiñas would make his MLB debut on April 20th. He would make his first start on May 10th. He ended up going back to the minors at the end of June but in 26 career games he was sitting at .288/.329/.318 and still playing quality defense.

Speaking of his defense, Sardiñas proved to be quite versatile in his time with the parent club in Texas. He played 19 games (15 starts) at second base, 13 games (eight starts) at shortstop, and appeared in seven games (four starts) as a third baseman. In fact, Sardiñas was even called upon to be the Designated Hitter on five occasions. In total, Sardiñas has logged 260.1 innings in a Major League infield and committed four errors. His Range Factor per 9 is comfortably above league average as a shortstop, for what it’s worth.

For 2015, Sardiñas has a position in front of him to win in Spring Training. Melvin and others under him in the Brewers front office have implied that Sardiñas is likely ticketed for Colorado Springs to begin the season, but given his versatility and his true nature as a shortstop first, Sardiñas could position himself atop the bench depth chart if he’s outstanding and someone like Hector Gomez underwhelms in camp. That said, Hector Gomez is out of minor league options so it’d have to be a significant difference for the Brewers to not give Gomez the first chance come April 6.

Still, with a solid stint in the Cactus League this year, Sardiñas could easily situate himself atop manager Ron Roenicke’s short list for call-ups should someone get hurt or underperform over a long stretch. After that? Keep your eye on how well not only Gomez plays, but Scooter Gennett’s job at second base is hardly set in stone long-term. If Gennett struggles against left-handed pitching and demonstrates an inability to be an everyday second baseman at the dish, in the field, or even both, Sardiñas could have a starting job with Milwaukee before 2015 is over.

(Then again, there were rumors of Sardiñas being of specific interest to the San Diego Padres, so perhaps he’ll be flipped and this entire diatribe will be for naught.)