Despite my pleas for expediency, the Milwaukee Brewers just announced their jersey number updates for 2014 on Wednesday, January 22nd. That’s 66 days away from Opening Day already.

Veteran readers know how this works. As we count down to Opening Day for the Milwaukee Brewers, I preview a different player on certain days along the way. Those days are determined by the jersey number that the player will be wearing while in big league camp.

The reason for this bonus article is that, as mentioned above, a lot of players were announced after the day on which they would have otherwise had their individual article written and posted.

These won’t be in-depth profiles of these players but I wanted to make sure you knew a little something about them before camp opens and you see their names popping up in box scores.

David P. Goforth was a 7th round draft pick out of the University of Mississippi back in 2011. He’s a full-term college guy and enters 2014 as a 25-year-old who has seen time at four different levels of the minor leagues. He has started more than he has relieved, but that was by design in part so he could develop his pitching arsenal. It was finally at Double-A Huntsville this past season when he began he transition to the bullpen. The Brewers had him targeted for that move anyway, and it should definitely assist him in his possible ascent to the MLB roster.

Goforth’s statistical measurements have shown that the move looks like a wise one. His K/9, HR/9, H/9, WHIP, and more have taken moves in a positive direction as Goforth has performed in shorter outings. Goforth has increased his profile through his production and he’s earned this NRI designation heading to camp in 2014. He won’t break camp with the Brewers, not that anyone is expecting him to, but the experience will be valuable as he could very well start the regular season as Nashville’s closer. 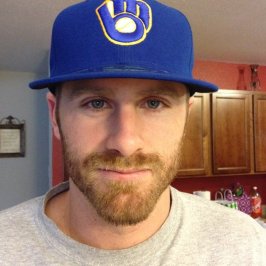 For the purposes of Spring Training, Triple-A phase Rule V Draft Pick Kevin Robert Mattison will be just a “camp body” insofar as he doesn’t have any non-catastrophic injuries chance of making the 25-man roster. That shouldn’t lend itself to your disliking the acquisition of Mattison by Brewers GM Doug Melvin back at the end of the Winter Meetings.

Mattison, 6’1″, 195lbs, is already 28 years old and has a total of five big league plate appearances (all in 2012 for Miami) and last year for the Triple-A New Orleans Zephyrs he only hit .216/.293/.662 but he wasn’t grabbed for his offensive potential anyway. Mattison is a veteran of 606 minor league games over six season, including 563 in centerfield and 21 each in the corner spots. Basically, he’ll be the new Logan Schafer for Nashville in 2014 and someone who could hold his own defensively at the MLB level in a pinch.

Friend of Brewer Nation, outfielder Mitch Haniger has had his share of publicity around these parts. He’s definitely turning heads on the field as well. Signed as a college junior in 2012, Haniger was taken with the 38th overall pick. He signed and hit the field, being assigned directly to the Class-A Wisconsin Timber Rattlers but an injury cost him some games in 2012. As a result, Haniger began 2013 again in Wisconsin. After 41 games of very strong offensive production, Haniger made the jump up to Class-A Advanced.

As a Manatee, Haniger’s numbers took an mostly expected dip. After all, the Florida Gulf Coast League is notoriously difficult for hitters. Still, given his numbers to begin the year and his continued gains in development throughout 2013, the Brewers tapped the prospect as their “preferred” designee to the Arizona Fall League. While there, Haniger rebounded as one would expect. He posted .280/.354/.480 in 100 at-bats over 25 games.

Haniger does profile defensively as more of a corner outfielder, so his ability to reach the Majors will likely hinge on how much more his bat advances over the course of the next couple of seasons.

Suffice it to say, the Brewers are confident in the current trend. 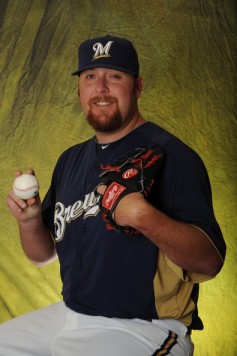 Back in big league camp again this year, Michael Olmsted was the last player “cut” in 2013 as the Brewers opted to bring Alfredo Figaro north as the long reliever. The reasons Olmsted was acquired last off-season are chronicled on last year’s post so I won’t rehash them, but his 2013 campaign wasn’t ultimately what either side hoped for.

Olmsted made 49 appearances at Class-AAA Nashville. Across 52.1 innings pitched, he allowed 39 earned runs and posted a 1.796 WHIP. He did strike out 52 hitters and allowed only six home runs but he walked 40 on top of the 54 hits he allowed. All told, his 6.71 ERA got him demoted finally in mid-August. He finished the year at Class-AA Huntsville.

To his credit, his small sample size as a Star was a very strong one. That, with his natural ability and potential, has garnered him an encore appearance on the big league fields.

Olmsted was outrighted off of the 40-man roster this off-season though. Add in the other options and a Rule V pick and making the 25-man roster this spring will prove harder than last year.

Speaking of players on a second consecutive go ’round, Kentrail Latron Davis is back to fill some outfield innings for Ron Roenicke early on in Cactus League play.

Davis is 5’9″ tall and weighs 200 pounds, but just continues to swing the bat as he’s moved up the organizational ladder. He hits left-handed and enters 2014 as a 25-year-old fringe prospect.

After beginning the 2013 season in the Huntsville Stars’ outfield, Davis hit well enough (.266/.372/.405 over 88 games) to get promoted to Class-AAA Nashville on July 11th. You may recognize that day as the one where Khris Davis was promoted to the big leagues for the balance of last year. That left an open spot in Nashville’s outfield and Kentrail Davis got the call.

With Nashville, Kentrail post a slash line of .270/.353/.367 and his rates took a hit as he began to adjust to the increased level of competition.

The outlook for 2014 is starting in Nashville and being available should the need arise. He’ll obviously continue to develop his game as well, but he could be the next Caleb Gindl in terms of waiting for his shot with Milwaukee.

Look, here’s the deal with non-roster invites for catchers. Early on in camp, every team needs a lot of catchers. There is a plethora of pitchers throwing and they need guys to receive those throws. However, unlike some, Cameron Garfield is not simply “organizational catcher guy” coming to big league camp for a couple of weeks.

On the contrary, Garfield (6’1″, 195lb) is just 22 years old and appears poised to take a big developmental step after staying mostly healthy in 2013. He played in 109 games, all for Class-A Advanced Brevard County. As noted above under the Mitch Haniger mini-profile, the GCL is awful to hitters and Garfield’s posted .250/.280/.379 should improve a bit as he gains more experience and possibly moves up a level.

Garfield has long been a higher profile prospect. That will happen when you’re a second round draft pick. He’s a name to know eventually though as he still projects for a major league career down the road.

Speaking of catchers, Adam Robert Weisenburger also is above the line of “just another receiver”. Weisenburger was listed as the Brewers’ best defensive catcher in the system entering 2013. If he is to reach the majors one day, it’ll be as a defensive-minded backup, but for a 34th round draft pick, that’s not a bad place to end up.

As for camp, he’ll share time with Garfield, Robinzon Diaz, and Matt Pagnozzi. Unlike last year, however, Jonathan Lucroy and Martin Maldonado won’t be leaving camp for the World Baseball Classic so he may end up seeing less game time in the end.

Dustin Scott Molleken is a 6’4″, 230 lb right-handed pitcher. He’s 29 years old and spent parts of the last two seasons pitching for the Nippon Ham Fighters of the Japanese Pacific League before returning stateside to finish last year with the Nashville Sounds.

This is the first chance that the big league staff will have to look at him, so while he won’t make the team out of Spring Training he certainly has plenty of incentive to perform well.

Finally, to the man who should have received a full write-up on January 23 before my time was consumed with all things Matt Garza this morning and getting all of these mini-previews written up this evening, around my other real life commitments.

Eugenio (eh-u-HEN-ee-oh) Velez was signed to a minor league deal by the Brewers in late July of last year after being released by the Toronto Blue Jays. Velez is now 31 years old and comes to big league camp by way of an official invite as part of his new contract with Milwaukee.

Still, after being touted as simple “organizational depth” when signed last year, Velez certainly did enough to earn himself the camp invite this year. He’s not exactly a player oozing with potential anymore, but in a pinch he could fill a void as a backup utility man.

And “utility” is certainly applicable. Listed as an outfielder on Milwaukee’s depth chart, Velez has seen time defensively at every position except for catcher and first base during his 11 minor league seasons. Velez has 520 games in the infield (with 336 of those at second base) and 311 games in the outfield (of which 117 are in centerfield).

Again, barring a slew of injuries, he won’t break camp with Milwaukee but as a potential short-term fill in during the 2014 regular season, he could have value.

So there you have it. We’re caught up to current with #66 Robinzon Diaz on tap by himself for Friday, January 24th.