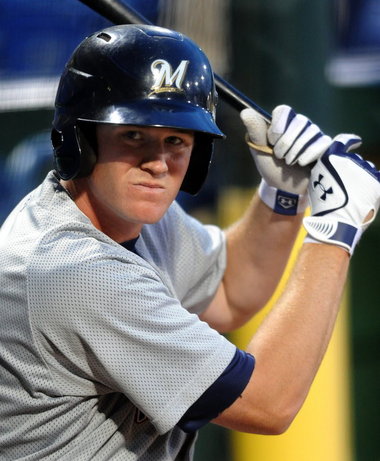 Most expect 2012 Brewers MiLB Player of the Year Hunter Morris to be added to the 40-man roster today.

Today is the deadline to add players to the 40-man roster in order to protect them from the annual Rule V Draft.

That draft takes place at the Winter Meetings and was originally implemented with the idea of getting players an opportunity that they might otherwise not receive. The basics that one needs to know are that if a player is selected by another club, that player must be rostered at the MLB level for the entirety of the next season and be “active” for at least 90 days. Otherwise the player must be offered back to his original organization.

From there, it gets a little more complicated including upfront cost, roster construction, option years, salary differential, etc. The point though is that eligible players who would be of interest to other clubs need to be protected from the draft. The only way to do that is to add the player to the 40-man roster.

Not every minor leaguer is eligible though. To be eligible for the Rule V Draft a player must have played in professional (affiliated) baseball for at least four full seasons if he was signed at age 19 or older, and five full seasons if signed at 18 or younger.

The Brewers have several eligible players this year who warranted consideration for protection, but at most four open roster spots with which to protect. Last year they protected more than that and possibly adding Corey Hart add a free agent would mean someone previously protected may eventually wind up back off the roster the end. Furthermore, the group of eligible players in full could make up their own 40-man roster still have two on the outside looking in.

Any of those aren’t added today are certainly names to look for on December 15th as teams make selections in the Rule V Draft. Others could be lost as well, especially if they’re able to be taken in the minor league portions of the draft like Eric Farris last year.

I have learned that the Brewers officials have had their discussions and made their arguments as to why each player should be protected. The final decision is, as it should be, now in general manager Doug Melvin’s hands.

We’ll have coverage for you whenever official word comes down. Decisions are due to the league office before the end of the day, or 11pm CST.

***BREAKING: A source informed me that Jason Rogers will be added to the 40-man roster today.***

***BREAKING PART TWO: A source confirmed that Hunter Morris will also be added to the 40-man roster, as widely expected.***

The Rule V Draft (long live the Roman numeral!) took place this morning in Nashville on the fourth day of the 2012 Winter Meetings.

There are three portions of the draft. MLB, AAA, and AA. If a player is taken in a particular portion of the draft, the player must then stick at that level for the balance of the 2013 season or be offered back to their original team.

In the Major League portion of the draft, the Milwaukee Brewers chose to pass with their selection. Doug Melvin had indicated that they were interested in one player but didn’t expect that player to still be available to select when it was their turn to pick. No one in the Brewers organization was selected by another organization during the MLB portion either. 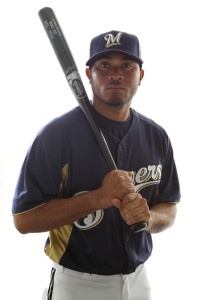 The Triple-A portion got underway and the Seattle Mariners (led by Jack Zduriencik, of course) chose Eric Farris out of the Brewers organization. Farris has had a couple of brief turns with the Brewers but is primarily a second baseman and is blocked as a result in Milwaukee. The Brewers worked it out with Farris’ agent after Farris was outrighted off of the 40-man roster this fall to assign him to the Double-A roster making it easier for a team to select Farris and give him an opportunity. Had the Brewers assigned Farris to Triple-A Nashville, a team would have had to take him in the MLB portion.

It’s just another example of the Brewers organization doing right by its players. They didn’t have to give Farris that opportunity. But along with the fact that they prefer to play top prospect Scooter Gennett at 2B in Nashville in 2013, they realized that Farris deserved an opportunity and it wasn’t going to come here.

Kudos to Melvin, Zack Minasian & Dick Groch for their decision despite it resulting in the loss of one of my favorite Brewers minor leaguers to root for.

***UPDATE: Eric Farris tweeted out a message following his selection by Seattle.***

Thank you to the Brewers and their fans 4 the love andoverwhelming support throughout my career! Lookin forward to the future w/ #Seattle

The Brewers announced this morning that they have added five players to their 40-man roster ahead of tonight’s midnight EST deadline for protecting players from the upcoming Rule V Draft.

The players protected are:

Brewers assistant general manager Gord Ash was contacted for some quotes* about the players added today and said the following about how they arrived at these five names.

“They’ve all excelled at various times over the course of the season at different levels. Probably even more important than that are the tools and ability they possess. We want to manage and protect our assets. We didn’t want to lose any of the five.”

“We had some other guys we liked as well,” said Ash. “We did our due diligence. We started with a list of nine or 10 names and whittled them down. There are surprises (in the Rule 5) every year. You can’t protect everybody.” 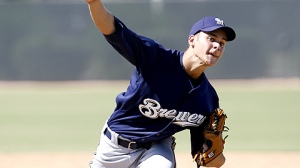 Bucci is 21 years old and coming off of a very good 2012 season split between the Low- and High-A levels of the Brewers farm system. He posted combined numbers of a 1.90 ERA, 1.102 WHIP, 9.3 K/9 in 42.2 innings over 10 starts. He missed time to begin the season coming off of an injury. His season debut was July 18th with the Wisconsin Timber Rattlers. Bucci finished his year with a stint in the Arizona Fall League. Not only are the Brewers high on him, but after missing the amount of time he did, it was a way to help him get more innings before shutting it back down for the winter.

“I wouldn’t put much emphasis at the level he pitched at. That was mostly a rehab assignment,” said Ash. “He’s young and has a good arm, and a team could keep him as the 13th pitcher on the staff (if taken in the Rule 5 draft). For $50,000 (the draft price), you can’t replace that kind of arm. It might be a longer road for him but we like his upside.” 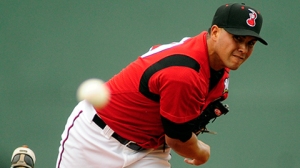 Burgos, 25, rocketed through the system in 2012. He began the year with the High-A Brevard County Manatees, made a stop in Double-A with the Huntsville Stars, and finished as a Nashville Sound in Triple-A. There was even talk that he was being kept at the ready in late September should the Brewers have needed an extra arm later in their season. Quite the year. That is evidenced in his numbers which ended up at a 1.95 ERA (2.91 in AAA), 1.035 WHIP (only 128 hits), over 171.0 innings pitched in 28 games (27 starts).

“Everyone wants to put labels on him and he is a Shaun Marcum type,” said Ash. “He has great command and without overpowering stuff he still has a knack for missing bats. It’s hard to explain. He has command of the strike zone and a real knack for getting out of trouble as well. Those are some of the intangibles you look for in a pitcher.” 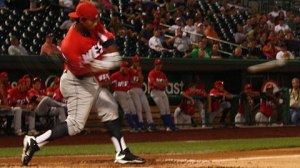 Davis is a 6’0″, 195 lb outfielder who both bats and throws right-handed, turns 25 next month. Davis began his season with Huntsville before an injury and subsequent rehab assignment cost him some time. He came back to Hunstville in early July and was promoted to Triple-A on July 30th where he played out the remainder of the season. Davis played a total of 82 games in the regular season posting a combined line of .350/.451/.604 which includes a .310/.414/.522 line at Triple-A in 32 games. Davis was also assigned to the Arizona Fall League in order to get more at-bats but he didn’t fare as well in the desert the second time around. Still, he does appear to have a bat which could play at the MLB level one day.

“He’s a tremendous offensive player,” said Ash. “He’s a bit streaky but when he’s hot, he’s real hot. I saw him hit the longest home run I saw all year at Nashville. It went over the batter’s eye in center field. The ability is there and in the American League it’s easy to carry an extra hitter (as a Rule 5 pick). His bat is close to being big-league ready. We didn’t want to lose him.” 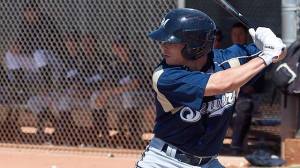 Gennett’s addition to the 40-man roster was probably the easiest to guess (outside of Burgos because Melvin told us so in an interview awhile ago) because despite his small stature (5’9″, 164 lbs) his profile has been an elevated one. All he’s done is hit since signing with the Brewers after being drafted in the 16th round of the 2009 draft. Over .300 at both Low-A and High-A, Gennett continued his progression with a full season in Double-A which saw his average dip to .293 but he basically maintained his OBP including an increase to his walk rate. He is still learning second base defensively after being drafted as a shortstop, but those issues are getting farther away in his rear view with each inning. His errors decreased, his fielding percentage has gone up every season (I know…I know), and his Range Factor per Game has also increased every season. 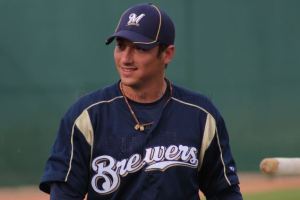 The final player who was added today (alphabetically, not necessarily reflective of ability) was tapped due to his incredible “season” in the Arizona Fall League. Josh Prince was just converting from infield to outfield defensively and after a pedestrian season at Double-A Huntsville (.251/.346/.360) the Brewers probably thought that they might be able to avoid protecting him for one more year. Then when Mat Gamel’s exemption request to play in the AFL was denied, the Brewers sent Prince instead and he absolutely rose to the occasion. Now, AFL offensive stats are often inflated but Prince even rose to the top of the inflation. He hit a team-best .404 which was good for second-highest overall in league. His OBP was .491 so he was still drawing some walks (a team-best 15, 5th-best in the AFL) and his slugging finished at .573 which gave him an OPS over 1.000 at 1.064.

With these additions, the Brewers 40-man roster currently sits at 39.

*Appreciation and credit to Tom Haudricourt at the Milwaukee Journal/Sentinel for the quotes about the players from Brewers assistant general manger Gord Ash.