In addition, the team acquired 3B/OF Garin Cecchini from the Boston Red Sox in exchange for cash considerations.  The announcement was made by General Manager David Stearns.

Cecchini, 24, spent most of the 2015 season at Triple-A Pawtucket, where he batted .213 with 7 HR and 28 RBI in 117 games. The left-handed batter spent time defensively in left field, first base and third base at Pawtucket.  Cecchini, who made his Major League debut with Boston in 2014, appeared in two games with the Red Sox in 2015.  He has batted .229 (8-for-35) with 1 HR and 4 RBI in 13 career Major League games, including seven starts at third base.  Cecchini was designated for assignment by Boston on December 4, 2015.

Cecchini (pronounced “chick-KEE-nee”) was selected by the Red Sox in the fourth round of the 2010 First-Year Player Draft.  Over five minor-league seasons, Cecchini owns a .279 batting average with 28 HR and 231 RBI in 510 games.  He was an All-Star in each of his first three seasons in the minors (New York-Penn League with Class-A Lowell in 2011; South Atlantic League with Class-A Greenville in 2012 and Carolina League with Class-A Salem in 2013).  He participated in the 2013 MLB All-Star Futures Game for the U.S. Team at Citi Field. 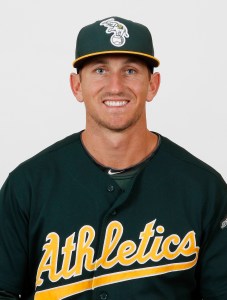 Second baseman Colin Walsh was selected in the first round (fifth overall) of the Major League phase off the Triple-A Nashville roster of the Oakland Athletics. Walsh, 26, batted .302 with 39 doubles, 13 HR, 49 RBI and 124 walks in 134 games at Double-A Midland in 2015.  Walsh, a switch hitter, played at Stanford University and was originally selected by the St. Louis Cardinals in the 13th round of the 2010 First-Year Draft. He signed as a minor-league free agent with Oakland on April 10, 2014.

Right-handed pitcher Zack Jones was selected in the second round of the Major League phase off the Triple-A Rochester of the Minnesota Twins. Jones, 25, went 5-4 with a 4.18 ERA in 45 relief appearances between Class-A Fort Myers and Double-A Chattanooga this past season. Jones played at San Jose State and was originally drafted by Minnesota in the fourth round of the 2012 First-Year Player Draft.

Left-handed pitcher Mitch Lambson was selected in the first round of the Triple-A phase off the Double-A Mississippi roster of the Atlanta Braves. Lambson, 25, appeared with four teams between the Houston Astros organization and the Braves organization in 2015. He compiled a 3-2 record with a 2.35 ERA in 40 relief appearances between Double-A Corpus Christi, Triple-A Fresno, Triple-A Gwinnett and Double-A Mississippi in 2015. He was traded from the Astros to the Braves organization on July 6, 2015.  In five minor-league seasons, Lambson owns a 20-14 record with a 2.72 ERA in 166 relief appearances. He was originally selected by the Astros in the 19th round of the 2011 First-Year Player Draft.

Right-handed pitcher Kender Villegas was selected in the second round of the Triple-A phase off the Double-A Springfield roster of the St. Louis Cardinals.  Villegas, 22, appeared in 30 games (1 start) and compiled a 3-4 record with a 4.03 ERA across three levels in the Cardinals organization (Class-A Palm Beach, Class-A Peoria and Class-A State College in 2015).  He was originally signed by the St. Louis Cardinals as a non-drafted free-agent on May 13, 2010.

The Brewers’ 40-man roster currently stands at 37 with the additions of Cecchini, Jones and Walsh.