Here is some additional information from the official release about Brewers On Deck:

Once again, food donations will be accepted through Hunger Task Force.  Donations can be dropped off at two main entrances to the Wisconsin Center, located at 4th Street and Wisconsin Avenue, and 4th Street and Wells Street.

Brewers On Deck will feature a number of activities for the entire family.  Autographs and photos from Brewers players, coaches and alumni; interactive games in the Kids Area; Q&A sessions and Klement’s Main Stage game shows with Brewers players, coaches and broadcasters; vendor booths with baseball memorabilia; Brewers Community Foundation’s Treasure Hunt, a 50/50 raffle, live auction and many other activities will all be a part of Brewers On Deck.

During the event, the Brewers will unveil a new book – Explore MKE: Your Neighborhood Our City. The Book is published by SHARP Literacy, Inc. and is sponsored by Brewers Community Foundation and Ryan Braun.  It tells the story of two children who share their differing experiences of Milwaukee and are attempting to figure out how they fit in.  It also features informational sections that weave together iconic Milwaukee institutions and neighborhood-based landmarks with important themes in common.

SHARP Literacy, Inc. is a non-profit organization that enhances future life success by energizing urban children and motivating them to identify themselves as confident, capable scholars and lifelong learners by inspiring engagement in reading, writing and research through hands on interaction and visual arts.

Details regarding autographs include the following:  Recipients of “PREMIER” autographs (players to be announced at a later date) will be chosen through a random selection process. Each fan in attendance will receive one Premier Entry sheet which may be redeemed at the Random Selection area outside the Main Exhibit Hall of the Wisconsin Center.  The Premier Entry sheet will be exchanged for a numbered coupon to be entered into the random selection process for any one of the select Brewers players.  Coupon distribution will be available at 8 a.m. the day of the event and will continue up to an hour before each designated autograph session.   There is no cost for coupons to enter the random selection process; however, those holding winning coupons must pay $25 at the respective autograph stage to collect their player signature.  There will be 250 winners for each of the autograph sessions.  The winning ticket numbers will be posted at the designated autograph stage no less than 30 minutes prior to each player’s session.

Players and staff not included in the PREMIER autograph list will not use the random selection process. Each of these players will sign 250 autographs at prices ranging from free to $10. A schedule of players, their session times, and distribution info will be posted later.  The autograph opportunities are for signatures on photo cards provided by the team.  For additional information, visit Brewers.com/ondeck.

Jorge Lopez and Orlando Arcia Named Recipients of the Robin Yount Performance Pitcher and Player of the Year Awards, Respectively 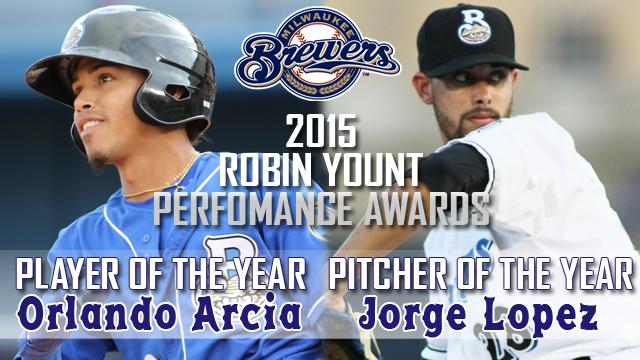 “We are extremely proud of both of these young players,” said President of Baseball Operations & General Manager Doug Melvin. “Jorge and Orlando have grown tremendously this season and their hard work is paying off, helping Biloxi reach the Southern League Championship Series. We look forward to seeing their names in the Brewers lineup in the near future.”

Lopez went 12-5 with a 2.26 ERA in 24 starts for the Southern League South Division Champions this season. His 2.26 ERA was only behind teammate Tyler Wagner for the league-lead. The Cayey, Puerto Rico native struck out 137 batters, while walking 52. After going 5-2 with a 3.02 in 12 starts in the first half, the 22-year-old went 7-3 with a 1.59 ERA in his final 12 starts of the year. He finished his campaign tied for the league-lead in wins, placed third in strikeouts and led the league in WHIP (1.10), batting average against (.205) and fewest baserunners per nine innings ratio (10.05).

The Brewers’ second-round selection in the 2011 June Draft out of Caguas Military Academy (Caguas, PR) was named both a mid-season and postseason Southern League All-Star. The League also honored the righty by naming him the Most Outstanding Pitcher of the Year.  In addition, Lopez was named Brewers Minor League Pitcher of the Month for each of the last three months of the season. He is currently ranked as the ninth-best and the second-best pitching prospect in the Brewers system according to MLB.com. Lopez was signed by scouts Charlie Sullivan and Manolo Hernandez.

The Venezuelan native was signed by the Brewers as a non-drafted free agent in 2010. He was named both a mid-season and postseason Southern League All-Star. Arcia was honored with the League’s Player of the Week award for May 25-June 1 when he batted .400 (10-25) with 6 runs, 5 doubles, a homer, 5 RBI and 2 walks in six games. In addition, Arcia was selected to represent the World Team in the 2015 Futures Game at Great American BallPark in Cincinnati. Arcia is ranked as the top prospect in the organization according to MLB.com.

Both players are currently with the Biloxi Shuckers where they have a 1-0 lead against the Chattanooga Lookouts in the best-of-five Southern League Championship Series. The Shuckers swept the Pensacola Blue Wahoos in the Southern League Division Series to advance to the finals. Arcia is batting .625 (10-16) with 3 homers and 9 RBI in the playoffs, while Lopez is 2-0 with a 0.66 ERA (13.2ip, 1er) with 4 walks and 13 strikeouts.

Opening Day is here for the minor leagues!

What follows are the announced rosters for each of the full-season minor-league affiliates for the Milwaukee Brewers, broken down by position group.