The Milwaukee Brewers today announced the team’s full 2016 promotional schedule. This season’s jam-packed calendar is filled with 14 All-Fan Giveaways, three brand new All-Kid Giveaways, the return of the Brewers Postgame Concerts and much, much, more.

Six bobbleheads, a Bob Uecker Talking Alarm Clock and the addition of three All-Kid Giveaways highlight the list of items that will be given away at Sunday afternoon contests at Miller Park this season. In addition, the Brewers will continue Free-Shirt Fridays for the third straight year. Seven different T-shirts will be given away throughout the season, including one at every Friday home game at Miller Park from June through August.  The T-shirt designs were chosen as part of an online vote and were revealed on stage at Brewers On Deck. Additional information about this year’s All-Fan Giveaways is available at Brewers.com/allfans. 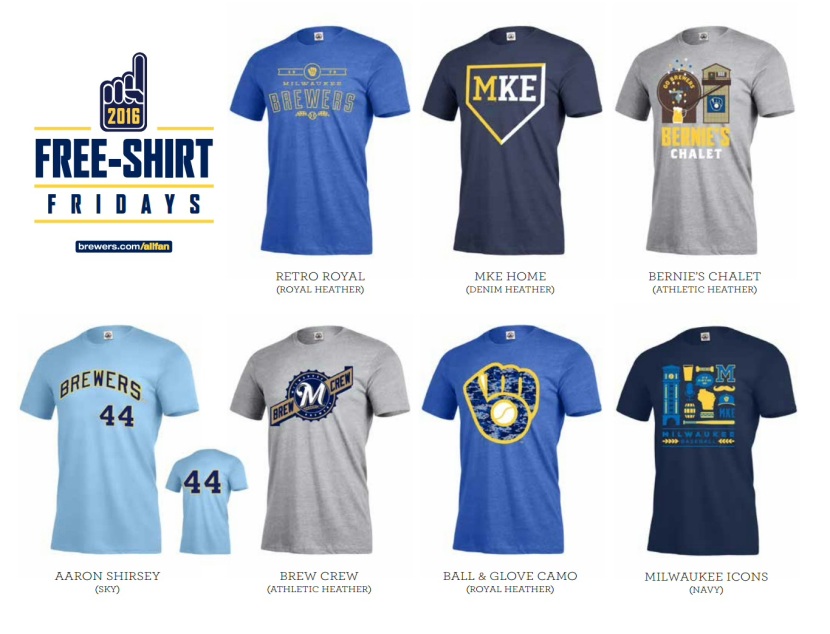 New for the 2016 season is the addition of Kids Eat Free Sundays.  Every Sunday home game, all kids 14 and under will receive a voucher upon entrance to Miller Park good for a free hot dog, apple slices and a bottle of water. If that wasn’t enough, the Brewers are excited to also announce three All-Kid Giveaways this year. All kids 14 and under who are in attendance will receive a Jonathan Lucroy Replica Jersey on May 15, courtesy of Kwik Trip, a Paint-Your-Own Bernie Bobblehead on May 29 and a Jonathan Lucroy Chest Protector Backpack on August 28, also courtesy of Kwik Trip.

Thanks to the success of last season’s inaugural series, the Brewers are proud to host two Postgame Concerts in 2016. On Saturday, May 14, the Brewers will welcome one of the music industry’s hottest stars to Miller Park as multi-Platinum pop artist Andy Grammer will perform a full-length, free postgame concert, courtesy of Pick ‘n Save, following the Crew’s matchup with the San Diego Padres. Then on Saturday, August 27, country music star Kip Moore will take the stage following the Brewers vs. Pirates game, presented by 94.5 KTI Country.

In addition to the many giveaways at the yard this year, the Brewers will bring back the 5-County, 5-Day Celebration, Spring Madness (414), Student Nights, Miller High Life Mondays and Kids and Senior Citizens Discount Days.

Fans in the region will want to head to Miller Park from April 20-24, as residents of Milwaukee, Ozaukee, Racine, Washington and Waukesha Counties can purchase half-price tickets during the team’s annual 5-County, 5-Day Celebration.

Another great deal for fans comes around Memorial Day weekend, May 27-30 as Spring Madness (414) returns. Fans can save 50% on select seats while enjoying special “414” concession pricing with $4 16oz beers, $1 hot dogs & small sodas and $4 nachos.

Fans looking for start-of-the-week fun will want to check out the return of Miller High Life Mondays, which feature a new lower price this year. Terrace Reserved tickets are just $6 for all Monday home games with a 6:20 p.m. start time, courtesy of Miller High Life.

Also returning in 2016, most weekday afternoon home game kids 14 and under and seniors 60+ save 50% on tickets on Kids and Senior Citizens Discount Days.

Students are also invited to take in the fun with a great deal as every Friday home game is a Student Night, where those in high school and college can purchase $10 Terrace Reserved or $15 Loge Bleachers tickets. On top of that, students can enjoy a special $3 Happy Hour menu – featuring hot dogs, nachos, soda and beer – through the end of the first inning.

The complete 2016 promotional schedule is available at brewers.com/promotions.

Here are the dozen designs to choose from for this year’s Free-Shirt Friday giveaways at Miller Park.

The Milwaukee Brewers today announced that the Club will feature 14 All-Fan Giveaways for the 2016 season. The schedule is highlighted by six Bobbleheads, a Bob Uecker Talking Alarm Clock, and the addition of three new All-Kid giveaways. [Note: The graphics below were released by the team though not included directly with this text which comes from the official press release.]

In addition, the Brewers will continue “Free-Shirt Fridays” for the third straight season. Seven different T-shirts will be given away throughout the season, including one at every Friday home game at Miller Park from June through August.

The All-Fan Giveaways start with the “Vintage Brewers Bobblehead” on Sunday, April 10 when the Brewers host the Houston Astros at 1:10 p.m. The Bobblehead is a nod to the past as it is a replica of some of the first items of its kind created nearly 50 years ago. This year’s Vintage Brewer Bobblehead features the classic Brewers 1980s pinstripe uniform and “Ball-In-Glove” logo.

All fans in attendance for the May 1, 1:10 p.m. game against the Miami Marlins will receive a Ryan BraunFranchise HR Leader Bobblehead. Braun, who became the Brewers all-time franchise home run leader in 2015, was selected as the Brewers Most Valuable Player last season.

On June 12, all fans in attendance will receive a “Barking BobbleHank” as the Brewers host the New York Mets at 1:10 p.m, featuring the team’s unofficial mascot, Hank the Ballpark Pup. This is Hank’s third bobblehead.

On June 26, former Brewers outfielder Greg Vaughn will have his Bobblehead day as the Brewers take on the Washington Nationals at 1:10 p.m. The bobblehead will feature Vaughn in his 1990s Brewers uniform. A first round pick in 1986, Vaughn appeared in two All-Star Games as a Brewer.

On July 10, the Brewers will introduce a new promotion for the 1:10 p.m. game against the St. Louis Cardinals. All fans in attendance will receive a Hall of Fame broadcaster Bob Uecker Talking Alarm Clock, encouraging fans to “Get up…Get up…Get outta bed!”

On July 31, Brewers pitcher Jimmy Nelson will have his Bobblehead day. In his first full season with the team in 2015, Nelson led the Brewers in strikeouts with 148.

The final Bobblehead giveaway of the year will be on August 14 when the Brewers take on the Cincinnati Reds. All fans in attendance will receive a Craig Counsell Bobblehead, with half of the dolls depicting Counsell in his current role as Brewers manager, and half depicting him in his playing days with the Brewers. The giveaway recognizes Counsell’s 18th season of combined playing and managing experience.

The Brewers have also announced the addition of a new Kids Eat Free Sundays promotion for 2016. This season, kids eat free at every Sunday home game. Upon entrance, all kids 14 and under will receive a voucher good for a hot dog, bottled water and an apple.

For the third year in a row, “Free-Shirt Fridays” will return to Miller Park for 2016. On Friday home games during the months of June, July and August (June 10, June 24, July 8, July 22, July 29, August 12 and August 26), all fans will receive a Brewers T-shirt. Once again this season, fans will have the opportunity to choose each of the seven T-shirt designs to be given away in 2016.

Beginning in January, several different T-shirt designs will be displayed at Brewers.com. Fans will have the opportunity to vote for their favorite designs, with the top seven winners being selected for “Free-Shirt Fridays.” The seven winners will be unveiled at Brewers On Deck on Sunday, January 31.

The complete promotional schedule for the 2016 season will be announced at a later date. For more information about All-Fan Giveaways and information on various ticket plans, fans are encouraged to visit Brewers.com/allfans.

Many of you know that I spend some of my time as a Brewers “Insider” for sports talk radio stations The Big 920 and The Big 1070 in Milwaukee and Madison respectively. I work directly with The Mike Heller Show. (They are the same guys who have guest hosted the nationally syndicated Dan Patrick Show multiple times over the last four months.)

Anyway, the reason that I’m writing today is to announce another partnership that I’ve been fortunate to enter into.

I will be working with Legends of the Field to bring my readers some exclusive opportunites for autographed Brewers memoribilia via giveaways, special access to Legends of the Field player appearances and signings, periodic discounts for merchandise with a special discount code, and more!

For more information about Legends of the Field, click to visit their website and read about their history, their new owner Jim Lindenberg, and how they have three physical locations around southeastern Wisconsin which the website marketplace supplements.

More details will be available about individual events and contests as they come up, but we’re planning on a couple of things early on to get this relationship kicked off in a good way.

The best part? All you have to do to be included is follow the directions as they come up. There will be specific instructions and information included with each forthcoming opportunity.

If you want to get a jump on things, follow me (@BrewerNation) and Legends of the Field (@lotfautographs) on Twitter if you don’t already. (They’re also on Facebook.)

I was in their Delafield store yesterday evening, for example, and believe me when I tell you that their merchandise is top of the line. They have exclusive signing contracts with some of the Brewers players which means that you can’t get their autographs from any other company and no other company can bring that player in for a signing event.

And speaking of those signings? For each individual signing that Legends of the Field hosts this season, one Brewer Nation reader will win a free autograph! All you have to do is show up!

That’s just the tip of the iceberg, Brewer Nation. But in the meantime, be sure that you look to Legends of the Field for authentic, certified Brewers autographs at great prices.

All bobbleheads and t-shirts of the 14 all-fan giveaways for the 2014 regular season have been announced. Enjoy. 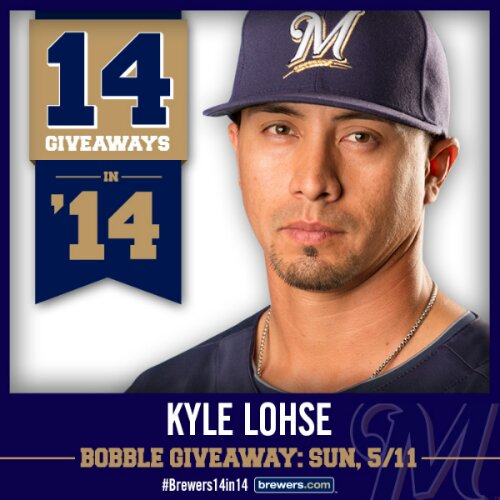 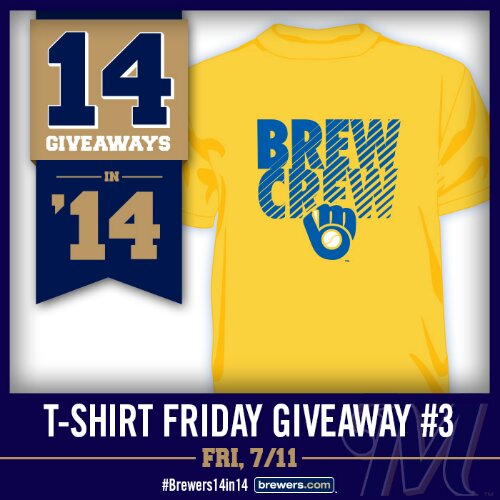 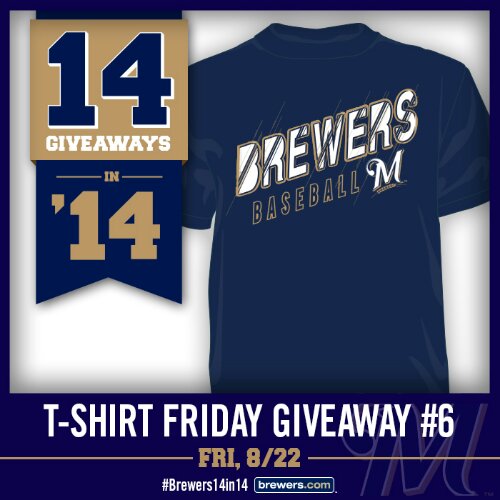