***EDIT: Sorry for the lateness of this article. I wrote it nice and early this morning but apparently saved it as a draft instead of publishing it.***

Pitchers and Catchers report today for the Milwaukee Brewers. It’s a symbolic moment for the team and for the coming end of winter, and although this winter has been remarkably mild in Wisconsin, the norm is a long and cold winter up in these parts. Therefore once P&C Day arrives, it makes you feel like there will be spring eventually again in the northern midwest.

Officially reporting today is a man who was drafted at a position (catcher) which would have reported today anyway had he stayed there but he was converted to a pitcher along the way and reports today anyway. That man is the owner of an fantastic Harry Carrey impression along with a sidearm delivery from the right side. Of course, I can only be talking about: 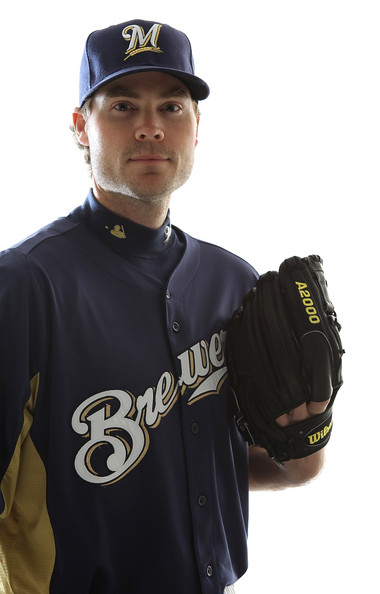 Timothy Charles  Dillard is a 6’4″, 225 lb right-handed pitcher who hails from Sarasota, Florida. He was originally selected in the 34th round of the 2002 First-Year Player Draft. (He and I actually share a birthday as well, for the record, though I am three years his elder.)

Dillard, once he was converted to a pitcher, used to have a standard over-the-top delivery. He experienced decent enough success that he earned a trip to the majors in 2008 but was knocked around a bit, and more so in his short  pretty heavily. Eventually he was sent down and didn’t appear to have a path back to Milwaukee. He then modified his approach and became a sidearm pitcher. It was a way to make him stand out from the pack and help him find his niche.

It worked, and Dillard rejoined the big league club in 2011.

He’s never been a shutdown pitcher and honestly shouldn’t face a left-handed hitter…ever…but he is a useful piece as a long-relief man and situational right-hander.

On a “first division” team, Dillard doesn’t have a true home. He is a tremendous individual (I had the pleasure of chatting with him for a few minutes at a charity event last season), but this organization has better pitchers available as options when everyone is healthy.

Despite that, I decided to profile Dillard for a couple of reasons. First, he’s spent time with the Brewers so people know him, but more so than that is the fact that he’s out of options and, barring injury to one of his colleagues, he’s unlikely to break camp with the club.

That’s significant because to get Dillard back to the minor leagues where he can stay ready to contribute should the injury bug plague the bullpen, he’d have to be exposed to waivers. Dillard has successfully passed through them before, but nothing is guaranteed.

The best chance to Dillard to make the club out of the Spring Training would be if Doug Melvin and Ron Roenicke decide that keeping depth is more important that keeping a better arm. Having said that though, some would argue and Frankie De La Cruz has a better arm and he is also out of options.

In my 25-man roster projection which I’ll be stating on the podcast I plan to record later today, I have only one open bullpen slot to be contested between Dillard, FDLC, Zach Braddock and Brandon Kintzler. Kintzler and Braddock both have options remaining so they could begin the year at Triple-A if the Brewers want to keep that extra depth.

Regardless, Dillard stands to get enough work this spring in order to gauge where he’s at in comparison to the other options for the last spot in the ‘pen. If he doesn’t make the cut but does sneak back through to the minor leagues, Dillard is absolutely an option to be called up when his special type of services are required.

A late start to today’s installment of “Brewers By the (Jersey) Numbers”, but that’s certainly not due to a lack of consideration for today’s player. Rather it was caused by an extreme case of exhaustion on the part of yours truly after a long night Wednesday into Thursday. If you’d like some proof, go look at when the Michael Fiers article was posted and then added an hour or so onto that for my bed time.

Enough about me. That’s not why you’re here.

You’re here because being 63 days away from Opening Day on April 6, 2012 means you get to read about a pitching prospect that logged big league time in 2011 while wearing jersey number 63.

That man is none other than Eulogio (pronounced ay-oo-low-HEE-yo) De La Cruz. 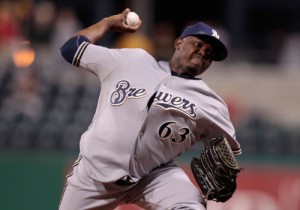 You may be saying to yourself “Eulogio? I remember a Frankie De La Cruz, but not this other guy.” Both men are listed at 5’10” and 215 pounds. Both will be 28 years old by Opening Day. Both hail from the Dominican Republic. Lots of similarities, wouldn’t you agree? Well, as Mac McGrath once said about Babe Bennett and Pam Dawson, “They are, in fact, one in the same.”

Frankie De La Cruz has logged big league innings with four different teams in the four years he’s been on a big league roster. Originally with Detroit, he was traded to the Marlins organization as a part of the Miguel Cabrera deal. After exhausting his final minor league option, he was traded from Florida to San Diego in March of 2009. De La Cruz was then designated for assignment by the Padres just over a month later after the Padres had to call up a starting pitcher (Chad Gaudin) to cover some injuries.

After spending the 2010 season pitching in Japan, De La Cruz signed a minor-league contract with the Brewers prior to the 2011 season. He wound up pitching in 11 games for Milwaukee, allowing four earned runs over 13.0 innings pitched. His major issue in previous big league stints, walking batters, didn’t flare up as much with Milwaukee. He “only” walked five while allowing 10 hits. It worked out to a 1.15 WHIP and clearly aided him in compiling a 2.77 ERA.

What the future holds for De La Cruz as a member of the Brewers organization is something of a mystery, however. He is out of minor league options and the Brewers have a number of bullpen arms returning to the team after being out with injuries in 2011.

Manny Parra, Zach Braddock, and Brandon Kintzler all stand to have a shot to head north as a part of the Brewers bullpen. Parra is out of options also, but Braddock and Kintzler both could be optioned down if Doug Melvin decides that depth is a focus.

It may seem like the numbers game isn’t set up to work in the favor of De La Cruz, but he has an opportunity to pitch his way to Miller Park this spring. If I had to formulate a guess as to the bullpen right now, it’d be John Axford, Francisco Rodriguez, Kameron Loe, Parra, Marco Estrada and José Veras all making the team for sure.

The departures of LaTroy Hawkins and Takashi Saito to parts out west opens up a couple of jobs, but De La Cruz is hardly guaranteed of a spot. He was left off of the post season roster last year, after all, and only has a total of 32.0 innings pitched over his career.

Working in his favor are a fastball and curveball that once lead to a #6 ranking in the Detroit Tigers prospects list by Baseball America. These pitches haven’t developed as dominatingly as some no doubt hoped when he was labeled as a future big-league closer, but the raw stuff is still there somewhere.

Bottom line for De La Cruz is that despite relatively effective appearances for the Brewers in 2011 after being called up to replace an injured Chris Narveson on the roster, nothing is close to guaranteed for FDLC going into 2012.

He’ll have to pitch well from the jump in order to force his way back onto the 25-man roster. Is it doable? Certainly. Is it likely? That remains to be seen once the mitts start popping in Maryvale on February 20th.

I was all set to post a profile of Brewers minor league pitching prospect Dan Merklinger today. Last spring Dan wore #65 so today would have been his day.

I normally wouldn’t mention the lack of an article, but had promised five straight days of profiles this week.

I remembered that it was Merklinger who had been designated for assignment when Marco Estrada was tapped to fill in for an injured Zack Greinke to begin last season. This came only about four months after Merkinger’s being added to the 40-man roster in the first place, but I still was going to profile Merklinger this off season anyway.

In performing my due diligence, however, I realized that Merklinger wasn’t invited to big league spring training this year as I guess I assumed he had been.

Therefore, I really didn’t feel it would be a good use of resources to draft an entire profile of him this year.

The series will officially resume tomorrow with a profile of #64: Michael Fiers. This week’s installments conclude Friday then with a look at Frankie De La Cruz.

Thanks for following along so far this winter. See you in this space again tomorrow.