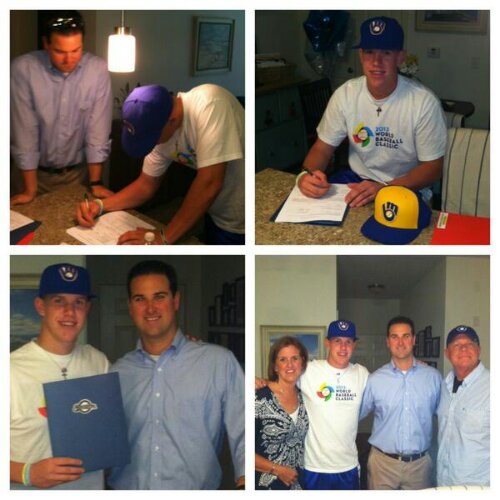 The deadline for players taken in the 2013 First-Year Player Draft is today at 4:00pm CDT.

The Brewers got much of their heavy lifting done early on, and as of this writing have announced agreements with 31 of their 40 draftees, including all of their first 15 choices. According to the intrepid reporting of Jim Callis and the rest of the Baseball America staff, we easily can find out that Milwaukee has spent $3,880,300 of its available pool money of $3,944,600, leaving them $64,300 “under budget.”

A couple of those unsigned picks have publicly indicated that they will not sign (including one such choice who declared his intention before the draft ever began back in June) so they come as no surprise. Probably the only player left in true limbo from what I’ve seen is 16th rounder Corey Miller, a RHP from Pepperdine University. The Brewers could offer him more than their remaining budget but there are penalties associated with that kind of thing.

***UPDATE: Corey Miller told me directly that he is going to return to Pepperdine for his senior season.***

Assuming no one else signs, the Brewers will have added 18 pitchers (13 RHP, five LHP), two catchers, three first basemen, two shortstops, and six outfielders. No official second or third basemen in the bunch but players switch positions often enough that it wouldn’t be so odd to see one or more of those out of this group at some point.

Time will tell soon if anybody else gets added to the roster out of the draft group, but between the 31 signees and several undrafted free agents, the Brewers feel as though they have added some quality gentlemen with a chance to contribute down the road.

In addition, the Brewers signed four non-drafted players today.  They include:

The Milwaukee Brewers tonight selected RHP Devin Williams from Hazelwood West (MO) High School in the second round (54th overall) of the 2013 First-Year Player Draft and drafted INF Tucker Neuhaus out of Wharton (FL) High School with the 72nd overall selection (Competitive Balance Round B).  Milwaukee forfeited its first round selection for signing right-handed pitcher Kyle Lohse as a free agent.

Williams, 18, went 6-1 with a 1.02 ERA and one save in nine games as a senior at Hazelwood West (MO) High School.  He struck out 93 batters and allowed just 17 hits over 48 innings pitched in 2013, limiting opponents to a .102 batting average.  Williams, who was aRawlings/Perfect Game Preseason First-Team All America selection, has a commitment to play baseball at the University of Missouri. Neuhaus, 17, missed the majority of the season due to injuries.  He has a commitment to the University of Louisville. 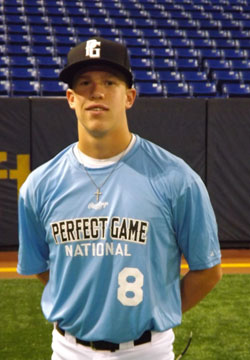