The Milwaukee Brewers today announced that the Selig Experience, a state-of-the-art attraction at Miller Park to honor retired Commissioner Emeritus and former Brewers Owner Allan H. (Bud) Selig, will open to the public on Friday, May 29 when the Brewers face the Diamondbacks.

The Selig Experience is located on Miller Park’s Loge Level in the left field corner. A highlight of the attraction is a multimedia presentation that tells the story of Selig’s role in successfully bringing the Brewers to Milwaukee, saving Major League Baseball in the city with his commitment to build Miller Park, and his tireless efforts to promote and grow the game in his hometown.

The Selig Experience will be open to the general public during all Brewers home games, from the time that gates open until the 7th inning, and admission is free for those with tickets to the game. Admission will be on a first-come, first-served basis. The attraction will also be open to selected tour groups.

A schedule of opening activities includes:

Wednesday, May 27, 6 pm: Media Preview Event – Credentialed media will be given an opportunity to tour the Selig Experience. More details will be announced later. Please note – there will be an embargo on news coverage related to the attraction until 7 pm on Thursday, May 28.

Thursday, May 28, 5 pm – A private gala will be held on the Miller Park playing field, with Commissioner Emeritus Selig, Brewers Owner Mark Attanasio and their guests on hand for a program, dinner and tours of the attraction.

Friday, May 29, 5:30 pm – The attraction will open to ticketed fans on a first-come, first served basis.

Miller Park already is known as a premiere destination for baseball fans, and the Selig Experience takes that to the next level. It will serve as a year-round attraction, adding another extraordinary enhancement to the overall fan experience.

The exhibition space totals approximately 1,500 square feet, and will include authentic artifacts from Selig’s tenure as the Brewers owner. It celebrates the fans’ love of the game, as told through the story of the Brewers founder.

The main multimedia show builds to a surprising encounter with the Commissioner himself inside an authentic reproduction of Selig’s County Stadium office, using a technology found in only a handful of exhibits around the world. After the show, Milwaukee fans will be delighted to take a sneak peek into Selig’s office for themselves.

The design and production of the Selig Experience is being led by BRC Imagination Arts, an experience design agency that Turns Brands into Destinations™. For more than three decades, its masterful storytellers have been chosen by iconic brands and cultural attractions all over the world to inspire and engage their audiences.

During his tenure as Brewers owner, Selig earned United Press International’s 1978 Executive of the Year award, and the franchise was honored with seven “Organization of the Year” awards.

Uihlein-Wilson Architects is also contributing to the initial design of the space for the Selig Experience.

The Milwaukee Brewers today announced that the Club will honor retiring Major League Baseball Commissioner and former Brewers Owner Allan H. (Bud) Selig by retiring uniform #1 in a ceremony that will take place at Miller Park next season. 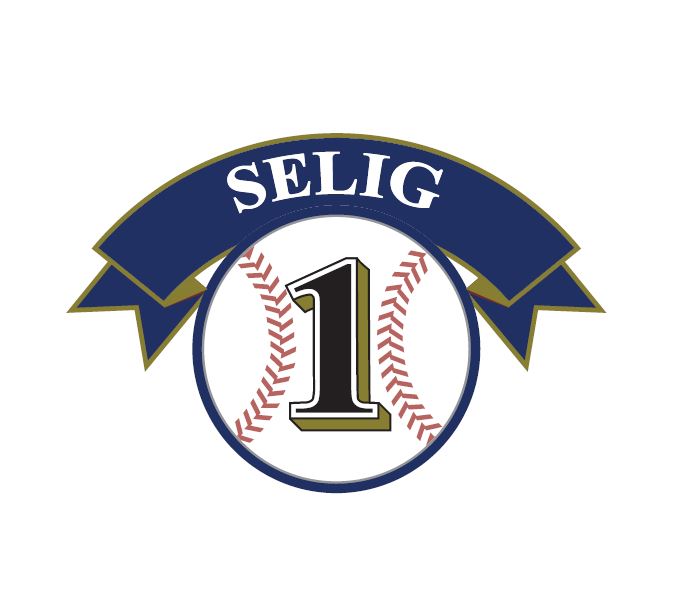 “We are proud to pay tribute to Commissioner Selig with this honor for all of his work on behalf of the Brewers as well as Major League Baseball,” said Brewers Chairman and Principal Owner Mark Attanasio. “The uniform number being retired in the Commissioner’s honor is significant, as the existence of the Milwaukee Brewers and Miller Park are a direct result of the Commissioner’s vision. Without his tireless efforts, neither would be a reality.”

This is the first in a series of initiatives that the Brewers have planned to honor Commissioner Selig, who will retire at the end of this year. Additional details will be announced later.

Commissioner Selig said: “I thank Mark Attanasio and his entire organization for this extraordinary honor.  The Brewers are a product of my hometown’s passion for Major League Baseball, and it was a privilege to play a part in restoring the spirit of community and kinship that the National Pastime inspires.  Knowing the great history of this franchise, I am truly humbled to look forward to a memorable day at Miller Park next season.”

During his tenure as Brewers owner, Selig earned UPI’s 1978 Executive of the Year award, and the franchise was honored with seven “Organization of the Year” awards.

More recently, Selig was honored with a statue at Miller Park, which was unveiled on August 24, 2010.

He became the ninth Commissioner of Major League Baseball, and during his tenure the sport has thrived.  As Commissioner, Selig has implemented important changes throughout Major League Baseball. He made popular structural changes in the game, including the Wild Card, the three-division format, Interleague Play and Instant Replay. He put in place the toughest drug-testing program in American professional sports. He also profoundly affected baseball’s economic landscape by instituting meaningful revenue sharing among the clubs as well as successful ventures, such as MLB Advanced Media, MLB Network, and the World Baseball Classic. MLB truly has thrived under Selig’s stewardship: It has enjoyed its longest period of labor peace with its Players Association and has consistently posted records levels of attendance and revenues.

The Milwaukee Brewers will formally unveil the “Brewers Wall of Honor” at Miller Park today.  The Wall of Honor will commemorate Milwaukee Brewers players that meet a set criteria based on service to the club. A total of 36 former Brewers players will attend today’s ceremony, marking the largest single gathering of Brewers alumni in team history, surpassing the 31 players who came in for the final game at County Stadium in 2000.

A private ceremony for inductees, their families and special guests will take place at 4 p.m. and the wall will be available for viewing to the general public beginning at 6:35 p.m. A pregame ceremony honoring the inductees will take place on the field prior to the game.

Players who meet any of the following criteria while wearing a Brewers uniform will be inducted into the Wall of Honor:

Note: John Axford, Ryan Braun, Prince Fielder, Yovani Gallardo, J.J. Hardy, Corey Hart and Rickie Weeks are the seven active players that, as of today, qualify for induction into the Wall of Honor following their retirement.  Active players closing in on the thresholds include Jonathan Lucroy and Carlos Gomez.

“Major League Baseball has worked diligently with the Players Association for more than a decade to make our Joint Drug Program the best in all of professional sports.  I am proud of the comprehensive nature of our efforts – not only with regard to random testing, groundbreaking blood testing for human Growth Hormone and one of the most significant longitudinal profiling programs in the world, but also our investigative capabilities, which proved vital to the Biogenesis case.  Upon learning that players were linked to the use of performance-enhancing drugs, we vigorously pursued evidence that linked those individuals to violations of our Program.  We conducted a thorough, aggressive investigation guided by facts so that we could justly enforce our rules.

“Despite the challenges this situation has created during a great season on the field, we pursued this matter because it was not only the right thing to do, but the only thing to do.  For weeks, I have noted the many players throughout the game who have strongly voiced their support on this issue, and I thank them for it.  I appreciate the unwavering support of our owners and club personnel, who share my ardent desire to address this situation appropriately.  I am also grateful to the Professional Baseball Athletic Trainers Society and our club physicians, who were instrumental in the banning of amphetamines and whose expertise remains invaluable to me.  As an institution, we have made unprecedented strides together.

“It is important to point out that 16,000 total urine and blood tests were conducted on players worldwide under MLB Drug Programs in 2012.  With the important additions of the hGH testing and longitudinal profiling this season, we are more confident than ever in the effectiveness of the testing program.  Those players who have violated the Program have created scrutiny for the vast majority of our players, who play the game the right way.

“This case resoundingly illustrates that the strength of our Program is not limited only to testing.  We continue to attack this issue on every front – from science and research, to education and awareness, to fact-finding and investigative skills.  Major League Baseball is proud of the enormous progress we have made, and we look forward to working with the players to make the penalties for violations of the Drug Program even more stringent and a stronger deterrent.

“As a social institution with enormous social responsibilities, Baseball must do everything it can to maintain integrity, fairness and a level playing field.  We are committed to working together with players to reiterate that performance-enhancing drugs will not be tolerated in our game.”