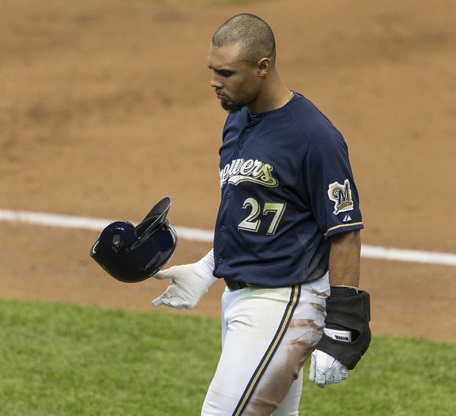 Major League Baseball today still hadn’t announced the results of Carlos Gomez‘s appeal of a three-game suspension levied for his actions during an on-field incident on Sunday, April 20 in a game against the Pittsburgh Pirates. So Gomez took the decision out of the arbitrator’s hands.

Gomez, who left the May 13 game early with lower back tightness, decided to drop the appeal of his suspension and begin serving all three games tonight. Gomez had appealed the length of the suspension immediately and finally had his hearing via video conference on Friday, May 9. The decision on whether to uphold his appeal was already several days in as the circumstances were seemingly carefully considered.

Unfortunately we’ll never know if Gomez would have had the suspension reduced. The timing works out for Gomez because even if he only sat out tonight with back spasms and MLB finally levied a reduced two-game suspension, Gomez would have missed the next three games anyway. And then you run the risk that they don’t reduce it or Gomez still isn’t healthy enough to play tomorrow and then he’d miss even more than three games.

Besides, in opinion it would make sense after the suspensions of Travis Snider (two games) and Russell Martin (one game) were upheld in appeal that Gomez wasn’t getting out without at least two games of his own. I didn’t see much of a way that Gomez — a principal arguer along with Gerrit Cole — would get fewer games than Snider despite Snider’s aggressive actions really inciting the physicality of the kerfuffle.

Bottom line, Gomez will miss the next two games against the Pittsburgh Pirates as well as Friday’s series opener at Wrigley Field. As they did when Martin Maldonado served his five-game suspension, the Brewers are forced to play those games down Gomez’s roster spot. They cannot replace him on the 25-man roster while he’s suspended.

So now that all of the fallout from the Easter Sunday skirmish has been meted out, and the teams have met on the field as well, this really should be a thing of the past.

Well, at least until Gerrit Cole gives up a tape measure blast and somebody pimps the hell out of it. I’m personally hoping that Mark Reynolds does the duty if Gomez doesn’t first. (I’m all for a full on Rickey Henderson job too, for the record.)

And if you don’t know what that is, here’s a little taste…

Ladies and gentlemen, I’m afraid I’ve got some bad news.

Despite a report earlier today that said the appeal of Carlos Gomez‘s suspension would be heard on Monday, May 5th, in actuality…

Some clarification on Carlos Gomez’s appeal. Gomez thought it was Mon., May 5. It is actually Fri., May 9, according to #Brewers.

So yeah, basically all that other stuff I said at that link up there? Forget it.

As for the roster situation, the need to get Logan Schafer back isn’t as immediate as it previously seemed. He’s still reportedly “on track” to return Saturday in Cincinnati, but it needn’t be at the expense of Ryan Braun taking a trip to the disabled list yet. Braun still has until that first game in the Yankees series to get healthy enough to play before Carlos Gomez will be lost and the Brewers could be back down to just two healthy true outfielders as they were Thursday night against the Reds.

Assuming everybody else stays at least as healthy as they are right now, then Schafer and left fielder Khris Davis will be starting once Gomez is suspended. If Braun still isn’t ready to play, then one would think that Caleb Gindl would be there to fill in.

Even if Gindl is optioned back down to Nashville tomorrow, he’d be eligible to return if Braun does ultimately wind up on the disabled list. Normally, for those not aware, you must spend a minimum of 10 days back down in the minors from when you are optioned before you’re able to be called back up. The exception is when said optioned player is recalled as an injury replacement.

Therefore, fellow Brewers fans, it’s best not to let the situation worry you and instead just react to whatever ends up happening. After all, this could be put to bed on Saturday if they simply keep Gindl and put Braun on the DL in order to reinstate Schafer.

The bigger worry is just how many games Gomez ultimately serves of a three-game suspension levied as punishment for the Easter Sunday skirmish.

Though, if Gomez gets all three and Braun is placed on the DL (retroactive to Sunday, April 27), then they could both miss the entirety of the series against the Yankees.

And that certainly wouldn’t impact the Brewers chances in a positive way.

Carlos Gomez says he learned after last night’s game that his appeal of his three-game suspension will be heard this coming Monday, May 5.

This tweet came over the wire not too long ago. What it means is that during the business day (so before the Brewers scheduled game that night is played), Gomez will have his appeal heard and decided upon. Gomez can be in New York for the hearing because whatever suspension remains — be it all three games or a reduced punishment — will be served starting immediately. Gomez won’t get off without some suspension, so losing the Monday night series opener at Miller Park against the Arizona Diamondbacks is a guarantee. That’s why El Potro can be in New York for the hearing without worry. What it also means is that the entirety of his suspension will be served during the series with the Diamondbacks. That probably couldn’t be better news for the Brewers. The D’backs, who as of this writing at the polar opposite of the Brewers in several respects, only have nine (9) wins on the season against 22 losses. The Brewers were the first (and as of “Publish” time, the only) team in MLB with 20 wins this season. You guessed where I’m going next. The Diamondbacks are the first team to 20 losses in MLB this year and (as of publishing) are still the only. Houston teeters at 19 as faces Seattle next. So whether Gomez misses three games, two, or somehow one, he’ll be back for the start of the Milwaukee stop on the Derek Jeter Farewell Tour on Friday, May 9th. The games on 5/5-5/7 though will force the Brewers hand on something else, in my opinion, if they haven’t already made a decision by then.

If Braun still isn’t available by Mon (and they haven’t DL’d him already), they almost need to. Brewers need Schafer in CF with Gomez out.

Put more verbosely than the 140 character format of Twitter allows, I’m saying that if Braun still isn’t healthy enough to play and they haven’t already placed him on the disabled list before Monday, they’ll almost have to do so in order to make sure they have enough outfielders to play all three spots as well as having Logan Schafer on the 25-man roster to start in centerfield.

If Braun goes on the DL after tonight’s game so Milwaukee can activate Schafer on the first day he’s eligible to return, then fine. If Braun thinks he’ll be able to play soon and they option the just-recalled Caleb Gindl to get Schafer back up, that’ll work, but then they’d be playing with only two true OFs if Braun still isn’t ready by Monday.

My point  is that Schafer will be on the field on Monday, May 5th one way or the other (unless he somehow reinjures himself before then). It’s just a matter of how the Brewers want to create the 25-man roster space for him. The D’backs are pretty punchless this season, especially with Mark Trumbo on the DL, but the fly ball outs still need to be caught by someone.

For Gomez, though, it looks like he’ll finally have some closure to this Easter Sunday saga…and in time for Mothers Day — and Kyle Lohse Bobblehead Day.