Sorry for the extreme delay due to real world responsibilities. Let’s ride.

This article should have been posted on Wednesday, February 17, 2016 because that day was 47 days away from Opening Day and we should have profiled… 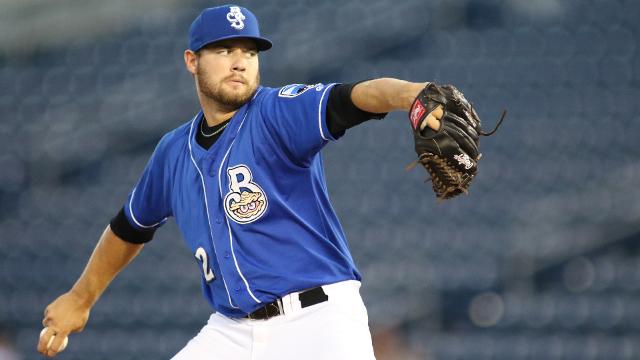 Standing 6’4″ and listed at 230 pounds, Adrian D. Houser has a prototypical “pitcher’s frame.” As a former 2nd round draft pick by the Houston Astros out of Locust Grove High School in Oklahoma, Adrian Houser has a prospect profile. After making his MLB debut on September 26, 2015 at the tender age of 22, Adrian Houser is just scratching the surface but is starting to fulfill a lot of people’s dreams on him including his own.

As the “RHP Adrian Houser too” of the Carlos Gomez/Mike Fiers to Houston trade last year, there was some wonder what kind of player the Brewers had received in Houser. After all, in his seven games at Double-A Corpus Christi before the trade, Houser scuffled to a 6.21 ERA allowed 39 hits and 15 walks in 33.1 innings pitched.

Well all he did in 37.0 IP for the playoff bound Biloxi Shuckers was post a 2.92 ERA. He allowed 33 hits but only walked six. The difference in BB/9 between the relatively similar sample sizes? An untenable 4.0 in Corpus Christi against a superb 1.5 in Biloxi. That was a big factor in his success.

Houser earned himself a late, post-playoffs September call-up to the Brewers. He got into two games, throwing an inning in each. He gave up a total of one hit and two walks but nary a run did cross on his watch.

For 2016, Houser won’t be beginning the season in Milwaukee. He’s got some maturing to still do in the minors. That taste of the big leagues was a success though and it should push his confidence along in the correct direction while at the same time making him hungrier to get back.

I expect Houser to start and there’s room for him in the Colorado Springs rotation but after just 70.1 innings at Double-A it wouldn’t shock me, nor would I consider it a setback, should Houser begin the year back in Biloxi.

Here is some additional information from the official release about Brewers On Deck:

Once again, food donations will be accepted through Hunger Task Force.  Donations can be dropped off at two main entrances to the Wisconsin Center, located at 4th Street and Wisconsin Avenue, and 4th Street and Wells Street.

Brewers On Deck will feature a number of activities for the entire family.  Autographs and photos from Brewers players, coaches and alumni; interactive games in the Kids Area; Q&A sessions and Klement’s Main Stage game shows with Brewers players, coaches and broadcasters; vendor booths with baseball memorabilia; Brewers Community Foundation’s Treasure Hunt, a 50/50 raffle, live auction and many other activities will all be a part of Brewers On Deck.

During the event, the Brewers will unveil a new book – Explore MKE: Your Neighborhood Our City. The Book is published by SHARP Literacy, Inc. and is sponsored by Brewers Community Foundation and Ryan Braun.  It tells the story of two children who share their differing experiences of Milwaukee and are attempting to figure out how they fit in.  It also features informational sections that weave together iconic Milwaukee institutions and neighborhood-based landmarks with important themes in common.

SHARP Literacy, Inc. is a non-profit organization that enhances future life success by energizing urban children and motivating them to identify themselves as confident, capable scholars and lifelong learners by inspiring engagement in reading, writing and research through hands on interaction and visual arts.

Details regarding autographs include the following:  Recipients of “PREMIER” autographs (players to be announced at a later date) will be chosen through a random selection process. Each fan in attendance will receive one Premier Entry sheet which may be redeemed at the Random Selection area outside the Main Exhibit Hall of the Wisconsin Center.  The Premier Entry sheet will be exchanged for a numbered coupon to be entered into the random selection process for any one of the select Brewers players.  Coupon distribution will be available at 8 a.m. the day of the event and will continue up to an hour before each designated autograph session.   There is no cost for coupons to enter the random selection process; however, those holding winning coupons must pay $25 at the respective autograph stage to collect their player signature.  There will be 250 winners for each of the autograph sessions.  The winning ticket numbers will be posted at the designated autograph stage no less than 30 minutes prior to each player’s session.

Players and staff not included in the PREMIER autograph list will not use the random selection process. Each of these players will sign 250 autographs at prices ranging from free to $10. A schedule of players, their session times, and distribution info will be posted later.  The autograph opportunities are for signatures on photo cards provided by the team.  For additional information, visit Brewers.com/ondeck.

This year’s crop of  eight Milwaukee Brewers prospects participating in the annual Arizona Fall League include three who weren’t even a part of the organization 32 days ago.

Farmhands from the Kansas City Royals, New York Yankees, St. Louis Cardinals, and Texas Rangers will work alongside those of the Brewers as members of the Saguaros this year.

By position, here are those players and some supplemental information: