Three touchdowns and three two point conversions is all that separates us from the most glorious of days which we call Opening Day. At least I think we do. I’ll have to check whether someone else beat me to it.

That’s right, math majors, we’re 24 days away from Opening Day at Miller Park on April 6 and as such I’m writing today about… 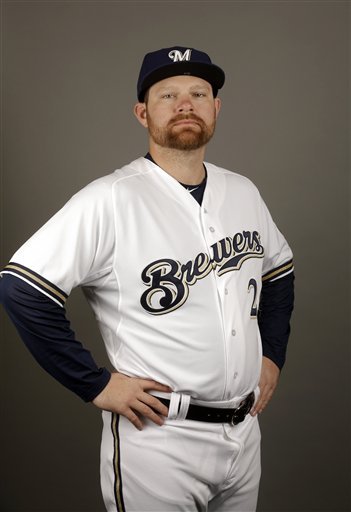 Adam Alan Lind (name courtesy of his parents) is a 6’2″, left-handed hitting and throwing, first baseman who is 31 years old. He was originally drafted in the 3rd round of the 2004 First-Year Player Draft by the Toronto Blue Jays out of the University of South Alabama. Some of that information was retrieved from my brain. I learned it along the way from reading and hearing. Some of it came from Baseball-Reference.com and will any statistics I put hereafter.

Up until an off-season trade which sent Lind to Milwaukee in exchange for Marco Estrada, Lind had spent his entire career with the Blue Jays. His best season came in 2009 when Lind played in 151 games and hit .305/.370/.562 with career-highs in almost every statistical category. He even made an appearance in MVP balloting, finishing 15th, while winning a Silver Slugger Award. In the five seasons since, Lind played in 150, 125, 93, 146, and 96 games. That’s due to a variety of factors, but health has always been a dark cloud waiting to rain for Lind.

The 2014 season saw Lind only play in 96 games. He missed the second half of April and first week of May and then missed time again following the first week of July until August 12th. Lind’s overall stats in those 96 games look very good however the truth is in the splits. In a painfully small sample size (for a reason), Lind hit just .061/.162/.061 in 33 at-bats against left-handed pitching. That’s two hits (both singles) and four walks. Against right-handed pitching? That’s a horse of a different color. Lind mashed to .354/.409/.533 in 257 at-bats.

The latter of those two splits is part of what led to the Brewers targeting Lind after the Blue Jays acquired Justin Smoak from the Seattle Mariners, ostensibly making Lind expendable. The former is part of the reason why Lind was available at all. It also led to immediate speculation that Lind would need a platoon partner. The team confirmed that they were thinking about the same and that the plan would be to utilize their All-Star catcher Jonathan Lucroy some of the time. That said, they also wanted to give Lind a fair chance during Cactus League play to see with their own eyes if he is at all capable of handling lefty pitching.

That plan was delayed when Lind’s back reportedly locked up while fielding grounders at first. Lind missed a handful of days before finally debuting as the team’s designated hitter. He would go 0-for-2 with a walk on Thursday, March 12. Lind’s health could prove to be a pivotal thing in the Brewers’ chances of competing in 2015. They simply need him available far more often than he can’t go if they’re going to capitalize on his abilities.

Time will tell whether the trade was finally the answer to the question that’s plagued the Brewers since Prince Fielder left town following Milwaukee’s deep 2011 playoff run, that of course being who can play first base while being productive at the plate?

The options to question have been numerous but so far unsuccessful. Corey Hart, Mat Gamel, Taylor Green, Alex Gonzalez, Sean Halton, Lyle Overbay, Mark Reynolds, Matt Clark (who the jury is still out on), Hunter Morris. All couldn’t fill in the blank with their name. The Brewers hope they finally have their answer in Lind.