Despite nobody wearing it at the big league level in 2014, 46 has a relatively thorough history as a jersey number for the Milwaukee Brewers. Bill Wegman wore it the longest (parts of 11 seasons from 1985-95) following Jerry Augustine who donned the digits from 1975-84. It was on the field in the Brewers’ first season (thanks, Dave Baldwin) and was most recently worn in 2013 by Hiram Burgos. But a new assignee is giving it a chance to be featured in the new season as well. His name… 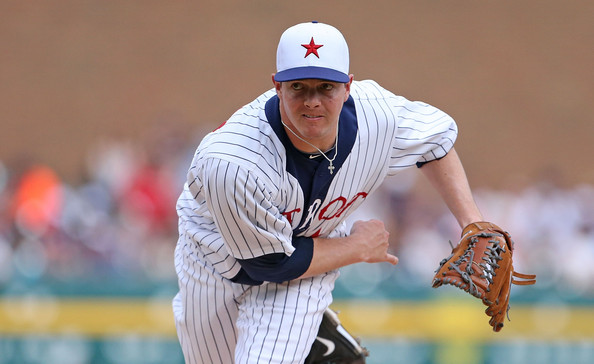 Acquired from the Texas Rangers one month ago on January 19, Corey Andrew Knebel is a relief pitcher with a blossoming high-leverage profile. A closer in college at the University of Texas at Austin (Longhorns), Knebel skyrocketed through the minors in 2013 after being drafted by the Detroit Tigers 39th overall in the competitive balance round of that year’s draft. The Texas native signed right away and reported immediately to Low-A ball where he put up a 0.87 ERA in 31.0 IP across 31 games. He struck out 41 batters and walked 10 en route to recording 15 saves.

Knebel pitched so well, in fact, that the Tigers sent him to the Arizona Fall League. In nine games, he would maintain many of his ratios though he gave up more hits and allowed four earned runs in just 8.2 innings pitched. In such a small sample size environment, Knebel’s results weren’t a concern. Just getting him the innings and experience against mostly Double-A level competition was why he went.

Last season for Knebel must have felt like a whirlwind at times. He broke camp with the Double-A affiliate where he would pitch just over a month (April 4 – May 8) compiling a 3-0 record in 11 games out of the bullpen. His 1.20 ERA and 23 strikeouts in 15 innings pitched took him on a promotion to the Triple-A Toledo Mud Hens. He would make his first appearance there on May 12, ultimately pitching to a 1.96 ERA in 18.1 innings, complete with 20 strikeouts. His Triple-A WHIP as a Mud Hen was 0.818 and he didn’t allow a home run. Knebel was then promoted to the big leagues on May 23. He would make his debut on May 24, allowing three earned runs on two hits and two walks in just one inning of work. (Welcome to The Show, rook!) Knebel would make seven more appearances as a Tigers reliever around another trip back to Toledo. His final MLB line in 2014 was 8.2 IP, 11 H, 7 R (6 ER), 3 BB, 11 K, 0 HR, 6.23 ERA.

Then, on July 23, just four days after being recalled again back to Detroit, the Tigers packaged their young fireballing righty with another pitcher in a trade with the Rangers for Joakim Soria. The Tigers’ loss would eventually be the Brewers gain, but not before an injury scare.

Knebel was optioned to Texas’ Class-AAA affiliate after being acquired. He would pitch in nine games for Round Rock but his numbers weren’t quite the same. Perhaps the tumult of the yo-yoing in Detroit and the upheaval of his world by being dealt to another organization had something to do with it, but it might have been because he was hurting. Knebel was shut down with a damaged UCL ironically following one of his best outings for the Express (2.0 IP, H, BB, 5 K). His FIP for Round Rock was 3.53, far worse than any other minor league stop he made.

When the Brewers identified the Rangers as a trade partner to unload Gallardo, it was slowed by what was reported as medical review. After we learned that Knebel was in the deal, the slow up made sense. A pitcher with a damaged UCL needs to be looked at extra closely. That said, the Brewers must have been comfortable with what they saw. The medical staff also has experience with a pitcher working his way through a UCL injury without requiring Tommy John surgery, though it certainly could be something that needs to happen down the road. Knebel passed his physical though, so everything must have been no worse than “as expected.”

Knebel would attend the annual Brewers On Deck fan fast which was less than a week after he was acquired. During his media availability he said that he’s been throwing for a little while and feels good. His elbow his healthy. That’s great news moving forward.

What it means for 2015 is that Knebel is very much in the mix for a 25-man roster spot. There should be quite the competition if everyone is healthy. Like Knebel, Brandon Kintzler, Jim Henderson, and Tyler Thornburg are all coming off injury and, in two cases, surgery. Chris Pérez will be in camp on a MiLB deal. Rob Wooten will also be in the mix as I stated in his BBtJN column yesterday. If the Brewers don’t acquire another bullpen arm that’s still not enough jobs with Jonathan Broxton, Jeremy Jeffress, Will Smith, and Neal Cotts all factoring in too.

All things being equal, I believe that the Brewers would let Knebel begin the year at their new Class-AAA affiliate in Colorado Springs and be at the ready should someone get hurt. As I said at the top of this piece, Knebel absolutely profiles as a late-inning, high-leverage reliever. The Brewers could want him to close games for the Sky Sox while waiting his turn instead of jumping into middle relief in 2015. Then again, that’s part of why they have Spring Training. Knebel and the other competitors should get plenty of work against MLB-level hitters in an attempt to figure out who can separate themselves from the pack.

Bottom line: Even if Knebel starts in Colorado Springs, I fully expect him to contribute along the way in Milwaukee in 2015.