We’re inside seven weeks until Opening Day! We’re also just three days away from the official Brewers Pitchers & Catchers report date of Friday, February 20, but this series counts down to Opening Day. As such, we are 48 days away so let’s look at the player who’ll be wearing #48 in camp, newcomer… 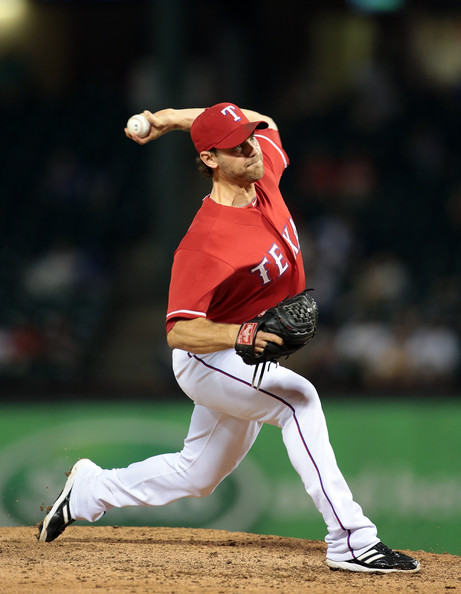 Neal James Cotts is a 6’1″, left-handed pitcher originally from Illinois. 35 by Opening Day, Cotts was a second round draft pick by the Oakland Athletics out of Illinois State University back in the 2001 draft when he was 21 years old. Cotts pitched just two minor league seasons in Oakland’s system before becoming a player to be named later in the deal with the Chicago White Sox that brought Keith Foulke to the bay area.

Cotts made his big league debut in 2003 with the White Sox (just four games) and was a mainstay on the south side of Chicago for three more years. He would pitch in 56, 69, and 70 games respectively in his three full White Sox seasons.

Still a pre-free agency pitcher, Cotts was traded to the Windy City’s north side after the 2006 season. He pitched for the Cubs for parts of three seasons including 50 appearances in 2008. His time in Chicago came to an end on May 27, 2009 as he was optioned to the minors after posting an ERA of nearly 7.36 in 11.0 innings.

Following his demotion, Cotts ended up tearing his ulnar collateral ligament (UCL) which led him to Tommy John surgery on July 2, 2009. That off-season the Cubs non-tendered him.

The Pittsburgh Pirates would sign Cotts to a minor league contract less than a month after the Cubs let him walk, despite his still needing a few months minimum to come back from the Tommy John surgery. Then, as Cotts was firmly on the comeback trail, he injured his hip and would ultimately miss the entirety of the 2010 season, culminating in his release by the Pirates before the big league season was even over.

Cotts once again found an employer fairly quickly as the New York Yankees inked the now 30-year-old southpaw. That relationship would come to an end that same off-season though. It was just over one full year after that release when the Texas Rangers would take a chance on a quite possibly broken down player.

(I could relate more about this period in Cotts’ career, but the story has been written already by better writers than I. Here is a link to Ken Rosenthal’s piece from 2014 which goes through a bit of the timeline including quotes from Cotts and his agent, Joe Bick.)

He was slowed in his first season in the Rangers org with a strained lat muscle in camp and would only pitch in the minors for Texas in 2012. They resigned him to a minor league deal after that year, however, and would purchase his contract on May 21, 2013. Cotts earned the call-up, after posting a 0.78 ERA with a wonderful 42 strikeouts to just five walks in 23.0 innings pitched. Cotts was brilliant for Texas in 2013 as well, totaling a 1.11 ERA in 57.0 innings across 58 appearances. He struck out 65 and walked 18.

Cotts should factor in the bullpen from the time camp breaks for the Brewers. He was signed to a Major League contract by Milwaukee, after all. Despite some of the 2014 numbers, Cotts has proven that he’s still got the ability to pitch at the big league level. The Brewers award winning medical staff will hope to keep Cotts healthy, and a move back to the National League could be a good thing for the veteran as well.

At the end of the day though, Milwaukee has a competition brewing in their bullpen already. If Cotts isn’t performing, left-handedness and being owed $3 million won’t be enough to keep him on the roster. There are younger, cheaper guys who could certainly take the ball and do so happily.