Today is Saturday, February 14 and we are inside of a week until big league Pitchers and Catchers report! P&C might be the best non-game-day day of the winter. On Deck is great, and Truck Day signifies that Spring Training is drawing nigh, and some players show up at Maryvale Baseball Park early, but “P&C” is when — with apologies to Montell Vontavious Porter — the mitts start poppin’, and the little things be stoppin’. 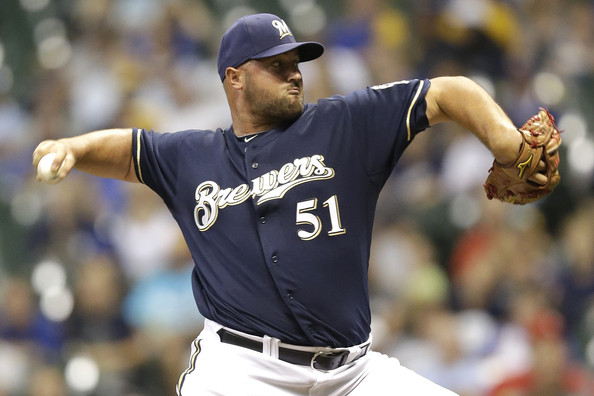 Jonathan Roy Broxton joined the Milwaukee Brewers via trade with the Cincinnati Reds on August 31 of last season. His cost was the full financial assumption of his contractual obligations and two minor league pitchers (Kevin Shackelford and Barrett Astin). Broxton was brought over to assume 8th inning duties for Milwaukee, along with possibly closing occasionally if the notoriously durable Francisco Rodriguez ever actually needed a day off when a close game situation arose in the 9th inning.

Broxton had done the setup man’s job incredibly well with the Reds earlier that year. He picked up seven saves — mostly when Aroldis Chapman was on the shelf to start the season — and finished 16 games in all for Cincinnati. He pitched to a 1.86 ERA in 51 appearances though his FIP was a troublesome 3.53 before September.

With the Brewers, Broxton saw action in 11 games, totaling 10.1 innings pitched. He allowed five earned runs causing his ERA to balloon to 4.35 with Milwaukee. He had allowed just 10 earned runs in the five prior months combined. Ironically, Broxton’s FIP as a Brewer was much better despite worse results. To paint as accurate a picture as we can, Broxton did give up four of his five September earnies in one outing against the Pittsburgh Pirates. That coming a day after the “Mark Reynolds didn’t know how many outs there were” game in which Broxton blew a save in the 8th inning against the St. Louis Cardinals.

The results were far more positive than negative for Broxton, but as is the case when you’re pitching late in games that are usually close, the individual bad results loom larger than the sum of the positives. Still, Broxton showed the late-inning mentality rebounding after a few days off to put up a pair of scoreless innings to close out the year.

Broxton’s professional road to Milwaukee is one of some note. If you’ve never looked into Broxton’s path, allow me to fill in some of those mental gaps.

Originally drafted by the Los Angeles Dodgers in the second round of the 2002 First-Year Player Draft out of Burke County High School in Waynesboro, Georgia, Broxton grew into a 6’4″, 295 pound frame that he used (and uses) to generate a lot of power behind a heavy fastball. A full-time reliever following his 2005 MLB debut for the Dodgers, Broxton has posted career bests in various seasons of 82.0 innings pitched (2007), 36 saves (2009), and a 2.30 ERA (2014).

Twice an All-Star (2009 & 2010), Broxton would pitch parts of seven seasons for the Dodgers before leaving as a free agent. He signed a one-year deal with the Kansas City Royals in 2012. The Royals would trade Broxton to the Reds later that same year. The following winter, Broxton would re-sign with the Reds on a three-year deal (with a mutual option for a 4th year) worth at least $22 million and up to $29 million in base salary. With an eye on the future, the Reds dealt Broxton in the division to the contending, if floundering, Brewers to bring some relief from their bullpen to their budget.

As we sit here today, Saturday, February 14, Broxton is lined up to be the closer when Opening Day rolls around on April 6 (just 51 days away). Whether that holds remains to be seen. The Brewers have been linked repeatedly to current Phillies closer Jonathan Papelbon which suggests that Doug Melvin doesn’t completely trust Broxton to handle the 9th inning at this point in his career. In fact, if one Ken Rosenthal report is true, the Brewers even offered Broxton back to the Phillies in one round of negotiations so that the Brewers wouldn’t be taking on quite so much “new” salary if they acquired Papelbon.

For now though, “Brox” will get the ball in the ninth. We all know how volatile that job can be though. Recent history? How about 2014 when Jim Henderson was earmarked for the job until physical limitations thrust K-Rod into the role. It happens all the time.

I had a chance to talk to Broxton’s agent in an interview conducted right after the announcement of the trade came down last season. At the time, B.B. Abbott told me that Broxton was happy to be joining a pennant race and would be content helping the Brewers in any way manager Ron Roenicke wanted to use him. That article can be found here.

Broxton is a competitor though, so I can only imagine how much he’d probably want the 9th inning back if he can get another crack at it. For the Brewers’ sake, you hope it’s because he’s pitched well enough to earn it and it’s not simply by default.