(Disclaimer: This is being first published on March 15th due to technical difficulties over the past week at my home.)

No time for a clever open today as we power through our previews. Perhaps it’s appropriate that we’re playing catch up while we profile the Brewers own starting catcher… 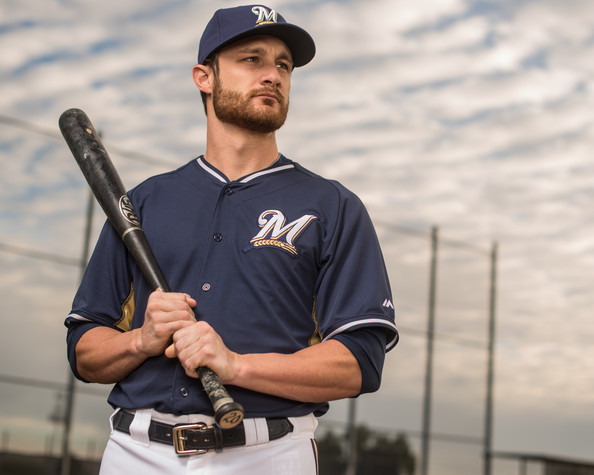 Entering his fifth season in a Brewers uniform, Jonathan Charles Lucroy will be looking for just his third “full” season as a starter. He came up in 2010 after an injury to Gregg Zaun, had a full season in Milwaukee’s most recent playoff season the next year, missed a lot a time due to random injury in 2012, and finally caught a full slate last season.

Lucroy has proven himself to be a quality offensive catcher and while he’ll tell you that he still doesn’t possess the strongest throwing arm, his receiving skills are top notch including being one of the league’s best at framing pitches. That last skill helps his pitchers get borderline strikes actually called as such.

The value of Lucroy goes beyond the field as well. He’s a locker room leader in the truest sense of the word. He works tirelessly to learn his pitchers, learn the opponents and their tendencies and weaknesses, and really prepare himself and his pitchers to give them whatever advantage he can.

As a leader, Lucroy is always the guy willing to speak to the media and more than that never just gives boring, stock, cliched answers. Whether the outcome of the game was good or bad, whether he had a good or bad game personally, he’s always available. He’s honest, sincere, and will tell you what he’s thinking to a degree. He’s also self-depricating, funny, and affable. All of those qualities combined with a good understanding of the game which all quality catchers seem to possess, and you can see why guys look to their backstop for leadership. It doesn’t hurt that he’s willing to answer their questions as well.

There isn’t any question where Lucroy’s plan lies for 2014. He’s the starting catcher. He’ll play in fewer games than in 2013 in an effort to keep him fresher, but also because he won’t be needed to play at first base. Helping things out also will be that Lucroy has been paired with Wily Peralta often this spring as they build their rapport. That will allow manager Ron Roenicke to not necessarily have to sit Lucroy against a tough pitcher simply because Peralta is going for Milwaukee. (Last year, Peralta was caught nearly exclusively by Martin Maldonado.) That should all result in a truer schedule for Lucroy and the result is that he’ll learn best how to keep himself as fresh as possible between days off.

Finally, let’s talk about Lucroy’s spot in the batting order. He hit third or fourth a lot in 2013 with all the games missed by Ryan Braun and Aramis Ramirez. He hit fifth otherwise with a smattering of games elsewhere. He hit best hitting fourth, but that’s a moot point.

So where should Roenicke bat Lucroy in 2014? The options seem to be 2nd, 5th, or 6th. Luc won’t lead off and 3rd and 4th are spoken for. He’s also too valuable to hit lower than 6th (and probably not that low in most lineups). Lucroy has a healthy on-base percentage and handles his bat well enough to hit second. He’d also benefit from the protection afforded by hitting in front of Braun. The negatives, Lucroy is faster than some catchers, but still does run like a catcher and that could clog things up sometimes in front of the heart of the order. His good, not great, power could be a benefit down the order too when Ramirez for sure and possibly Gomez inevitably leave some runners on base throughout the year.

Ultimately, Lucroy should offer enough value wherever he hits. The Brewers just need to keep him at and behind the plate as healthy as possible.

If they can do that, it should be another good season for the 27-year-old Florida native.