You haven’t seen Logan Schafer yet on the countdown and I know some of you may have thought that today was his day. After all, he’s worn the number 22 every time he’s taken the field for the parent club in his career. 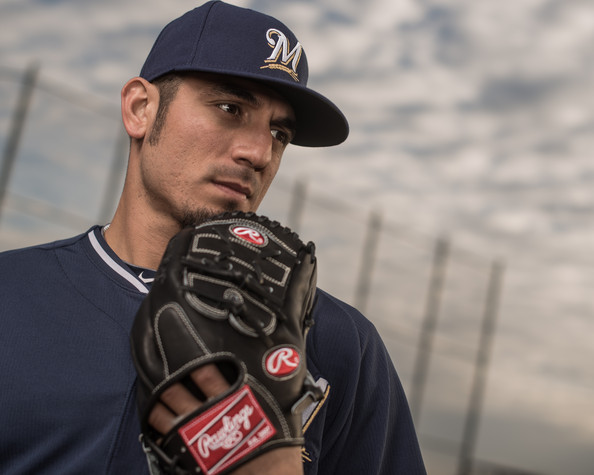 When the Brewers were navigating the waters of the off-season, they had question marks at a handful of positions. First base, second base, corner outfield, the bullpen…all spots where the team had some kind of question.

Where we didn’t see much of a question was in the starting rotation. Yovani Gallardo, Kyle Lohse, Marco Estrada, Wily Peralta, and almost assuredly Tyler Thornburg were going to be the five men to take the ball every fifth day. There wasn’t much thought of doing it another way unless the rumors came true regarding solving one issue by creating another problem (i.e. the Thornburg for Ike Davis swap).

Then, Doug Melvin’s noted off-season patience paid off and a market materialized where there wasn’t one previously that could have included the Brewers.

The free agent starting pitchers around MLB were basically on ice while the posting of japanese import Masahiro Tanaka was happening. The New York Yankees finally signed Tanaka and the  market began to move. Still, some of the early deals were at such a high dollar amount that the Brewers simply couldn’t play in that sandbox. And they certainly weren’t about to forfeit another first round draft pick (for the second year in a row) by signing one of the pitchers who received a qualifying offer like Ervin Santana, Ubaldo Jimenez, or their ilk.

But then there sat a pitcher who was ineligible to receive a qualifying offer. Someone who had been traded mid-season in 2013 and therefore was exempt. Someone who was probably looking to get back into the National League after a rough stint in the American League.

That pitcher was Matthew Scott Garza.

(Side note: The reason that Garza was still available to sign so late? He was offered a similar deal to the one he signed in Milwaukee by the Los Angeles Angels but he chose not to even respond because he was on vacation and didn’t want to deal with business. The Angels pulled the offer — as owner Arte Moreno is apt to do — and he ended up in what is probably a better situation for him overall.)

Garza, for the record, is a 6’4″ right-handed pitcher who is a veteran of eight Major League seasons. He was a first-round draft pick (25th overall) by the Minnesota Twins in 2005 out of California State University Fresno. He signed early, got to work, and made his MLB debut in just under 14 months from signing his first professional contract.

He “works off his fastball” as you’ll hear announcers say, and possesses one of the best sliders in baseball. The evidence there is laid out nicely here in a piece by my pal Alec Dopp over at BaseballAnalytics.org. I could reproduce it here, but I’ll save myself a little time by linking to it instead. Trust me when I say that it’s worth the few minutes to click over and read.

His professional career has seen plenty of ups. In fact, outside of his truncated debut season, Garza hasn’t finished a season with an ERA over 3.95 and has been as low as 3.32 in a full season’s worth of work (2011 – Chicago Cubs), and was at 3.12 in 2013 with Chicago before that aforementioned mid-season trade. Garza made at least 30 starts for four consecutive seasons before running into some injury troubles at the end of 2012. What was dubbed a “stress reaction” in his pitching elbow shortened Garza’a 2012 season and delayed his 2013 debut until May 21st. Once he debuted though, the reports were that neither Chicago nor Texas gave Garza treatment for the elbow in 2013. As a result, Garza entered free agency healthy.

As for that contract, here are the details. It’s five-year deal worth between $50-$67 million. Garza earns $12.5 million annually from 2014-2017, $2 million each year of which is deferred without interest. In bonuses, Garza can earn $500,000 each year that he makes 30 starts and pitches 190 innings. That’s a total of $1 million in bonuses each season. Then, Garza’s fifth year option vests at $13 million if he meets all of the following criteria: He starts 110 total games during the first four years of the contract;  He’s not on the disabled list at the end of the 2017 season; He pitches at least 115 MLB innings in 2017. If Garza doesn’t reach all of those qualifiers, the option becomes the team’s. The Brewers can exercise the option for $5 million in that situation. Furthermore, the option only costs $1 million if Garza is on the DL for 130 days in any 183-day period.

Got all that? Good.

Here’s the bottom line for Garza in 2014. He needs to be healthy, he needs to pitch effectively. If he does those things (and his history suggests that he’s likely to) he’ll help the Brewers win games and position himself well to eventually earn that full 2018 option value.

The Brewers would happily pay it if Garza is contributing well enough to earn it.