It’s late on February 21st, but it’s still February 21st. That puts us exactly 38 days away from Opening Day.

No time for fluff tonight. Let’s get going on the profiling of… 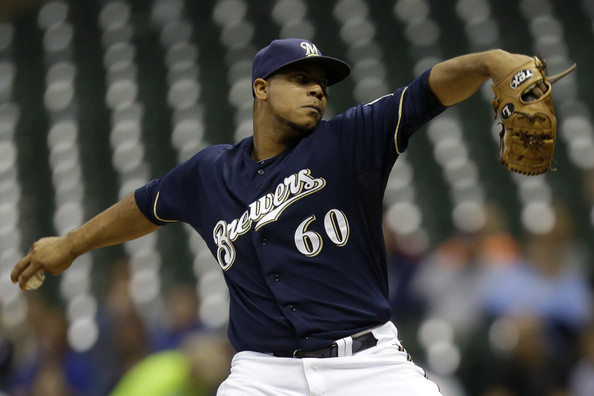 After wearing #60 in his limited engagement in 2012 and throughout the much fuller MLB season in 2013, Peralta was among the Brewers players to switch things up heading into 2014. Coming up on the countdown still are both Tyler Thornburg (who switched from 63 to 30) and Logan Schafer (who took number 1 after Matt Garza rode his horse into town).

We’re here now, so let’s discuss the former top prospect of the Milwaukee Brewers and what his full-season debut was like.

On their own, some of his full-season numbers may not look all that spectacular, but among them were flashes of brilliance. Peralta completed two games (which is an enormous feat in recent Milwaukeean history), and really posted solid numbers through the latter two-thirds of the year.

Here are some of his splits by month:

July was by far Peralta’s best month in many respects, and like much of the rest of the team, May was easily his worst. But the bottom line for Peralta was that he struggled to get going early.

Without too much extra bluster, it’s important to mention that the workhorse Dominican needs to figure out a way to get going early in the year. After all, this isn’t an isolated incident. In 2012, as I mentioned last year (along with his history, and pitch breakdown), Peralta got off to a slow start as well.

The Brewers start off with a tough schedule on paper in the month of April this year, so Peralta will need to get things going early…

And it’s not just so that he can pitch effectively. It’s also so that he has a job in the rotation. Don’t misunderstand, I think he’s virtually a lock for the big league rotation, but if he struggles in Arizona and someone like Tyler Thornburg dominates there, the Brewers could do something radical like give the ball to Thornburg while he’s hot and Peralta is “ramping up”, so to speak.

Again, though, I think Peralta has his job lined up and will head north in either the fourth or fifth spot in Ron Roenicke’s rotation.

What he does with it after that is up to him — his off-season efforts, preparations, and training.