After a brief yet relatively lengthy hiatus, “Brewers By the (Jersey) Numbers” returns on February 5, 2014!

We still have 54 days to bear through one of the coldest and snowiest winters on record in Milwaukee until Robb Edwards begins lineup introductions at Miller Park on Monday, March 31.

It feels like spring is months away, but the 54 days shall pass.

In that meantime, let’s keep profiling some baseball players who’ll be reporting to big league camp over the next two weeks. 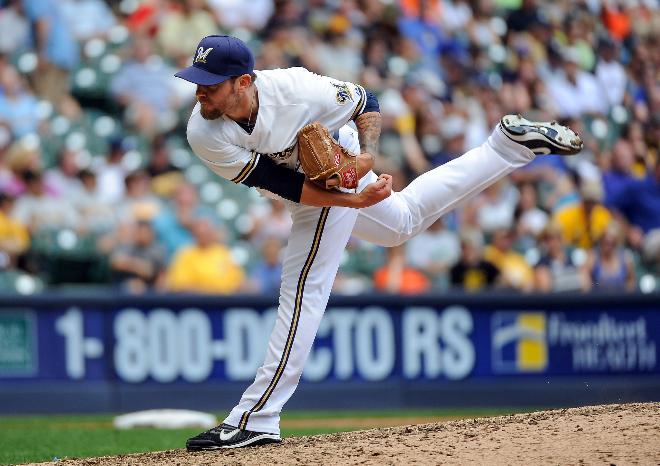 As this is Blazek’s first round through “BBtJN”, I’ll take a look at his full career up to this point along with the standard review of 2013 and 2014 outlook.

Michael Robert Blazek is a 6’0″, 200 lb right-handed relief pitcher from Las Vegas, Nevada. He was drafted out of high school in the 35th round of the 2007 First-Year Player Draft by the St. Louis Cardinals. Blazek made his Major League debut in June of 2013 at the age of 24 and will be 25 years old by Opening Day.

The Brewers acquired Blazek straight up in trade for former closer John Axford. We needn’t rehash some of Axford’s struggles in this space, but basically it was a swap of cost and track record for results inconsistency and cost certainty. Blazek won’t be arbitration eligible until 2017. He’s under team control until 2020. Blazek can also be optioned to the minors in 2014 with no danger of losing his services.

As many bullpen pitchers do, Blazek was once a starter in the minors. He began his career in more of a hybrid role however. Through the end of 2010, Blazek had made 36 starts out of 71 appearances. It wasn’t until 2011 when Blazek spent an whole season starting. He made 24 starts at Class-AA Springfield and two starts at Class-AAA Memphis. He won both of his Triple-A starts, but they came nearly two months apart.

Blazek technically finished the 2011 season at Triple-A but began 2012 back at Double-A. He pitched in 42 games in 2012, making just eight starts. He finished with a 4.43 ERA in 83.1 innings pitched but the Cardinals had a decision to make as it related to Blazek’s future.

St. Louis added Blazek to the 40-man roster after the 2012 season in order to protect him from the Rule V Draft. He responded to the vote of confidence by posting his best professional season in 2013. That’s what led, in part, to the deal with Milwaukee.

There’s been some inconsistency in his game, flashes of brilliance, and frustrating lapses. He’s got a big fastball though (average 94.8 MPH, max 97.5 MPH) and mixes in mostly a curve and slider.

His outlook for 2014 could actually see him begin the season back in Triple-A, though this time that would mean Nashville, while he works on his control. That likelihood would increase if everyone is healthy throughout camp.

The tipping point for Blazek lies in that control though. If he can fix his walk rate while maintaining his strikeout numbers, he’ll contribute in the back part of the bullpen for Milwaukee.

And if he can’t? Well, the guitar scoreboard is awesome.