Traditionally the most depressing month on the year, February has never been the doldrums for me. That’s because with February comes the three most beautiful words of the off-season: Pitchers and Catchers.

The official reporting date for Brewers pitchers and catchers is two weeks away from today. We aren’t here to count down to P&C though, are we? 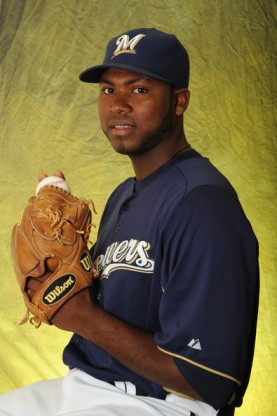 As we sit 14 days away from Pitchers & Catchers on February 15th, we simultaneously sit 58 days away from Opening Day on March 31st. As such, we’ll take a look at the player who has decided to switch to jersey number 58 this year…

If you’re new to the blog and don’t know much about Ariel Peña and how he came to MLB and subsequently to the Milwaukee Brewers, I’ll direct you to last year’s profile of the man.

As for his play on the field, I’d like to reference an excerpt from last year’s column as a discussion point:

One report I found said that Peña was “underwhelming in person” and that while the Brewers are likely hoping for more due to Peña’s durable frame, the writer said that Peña profiles as a “prototypical 7th inning reliever.”

As with any player, the true outcome will be determined by how he adjusts to the increasing level of competition as he advances up an organizational chain. The road to The Show is littered with the arms of promising players who couldn’t adjust. I don’t feel that Peña’s lot will be that, but he must improve in 2013 over a 7.24 ERA in 7 starts over 32.1 IP in which he allowed 40 hits and 23 walks.

He’s got a bit of wildness to him that can’t be ignored but his big fastball (reportedly touching 98 MPH), low 90′s sinker, and “wipeout” slider would make for a repertoire that can hang in a starting rotation. The best part though is that Peña is still young enough to harness his stuff at some point and still have a long and productive MLB career.

When 2012 finished, Peña was a bit of an enigma. He carried a 2.99 ERA in the Angels system before coming to Milwaukee as a part of the Zack Greinke deal. You read above how he finished after the deal.

In English, what most of those statistics are indicating is that Peña may have been luckier than good in arriving at some of his numbers in 2013.

My point is that even though Peña seemed to gets things back under control in 2013, he’s hardly out of the woods and on his way to stardom in Milwaukee’s rotation. There’s still much to learn, much to refine, and much to improve upon.

The clock is always ticking though, and in two short weeks the results of all the off-season work will begin to manifest itself.

Speaking of the off-season, Peña pitched briefly in the Dominican Winter League for Licey. He only pitched in two games in relief and recorded five outs, so the stats don’t exactly matter. The point is that he’s still working.

Soon enough it’ll be apparent how he’s benefited from it.