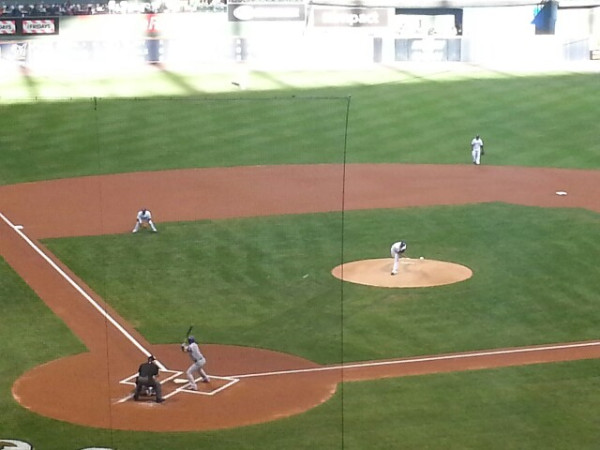 Miller Park was buzzing on Saturday night as the Brewers’ 2012 Minor League Pitcher of the Year, Hiram Burgos, made his Major League debut against the Chicago Cubs.

Burgos’ first pitch was a strike, but despite allowing his first batter faced to reach on a bloop single, Burgos faced the minimum through three. A true test though would be the second time through the order. The hitters made a bit more contact, though none of it solid, in the fourth inning, leading to a Cubs’ run and a tie game.

He was sharp throughout, keeping the visitors off balance with his repertoire of pitches. Back in February, Burgos told me that he throws four pitches: a fastball that sits between 88-92 MPH, a change up between 83-84, a cut fastball of 86-87 MPH, and a curveball down around 73 MPH. He utilized everything he had on this night, working through five full innings and not walking any hitters. He’d have gone farther as he finished the fifth at just 83 pitches, but Ron Roenicke pinch-hit for the young Puerto Rican as the offense had put runners at 2nd and 3rd with just one out.

The Brewers ended up scoring two runs in the inning, putting Burgos in line for his victory MLB victory. Then Brandon Kintzler entered and locked the Cubs down in their half of the sixth before the Brewers tacked on two more runs in the sixth courtesy of the Cubs defense.

All in all, an impressive night for Burgos who had this to say following the game:

“It’s been my dream to play in the big leagues. I’m happy to just help the team win. Six games in a row now.

Burgos said that he was anxious to go out and warm up prior to the game, but once he threw his first pitch, he was comfortable again. He said that the plan he and catcher Jonathan Lucroy were working off of helped him settle in.

The offense and bullpen gave Burgos the support he needed. Brandon Kintzler worked two perfect innings, striking out three. Michael Gonzalez struck out the side in his scoreless 8th inning, despite getting himself into a little trouble along the way. After allowing the lead off hitter to reach in the 9th, Gonzalez was lifted in favor of Burke Badenhop who retired the three Cubs hitters he faced in order to lock up a 5-1 victory. The W goes to Burgos who is now 1-0 in his career with a 1.80 ERA.

Getting his first victory in  his first career start when it takes some guys a long time (if ever) was something that didn’t escape Burgos.

“It’s a blessing. I thank God and my teammates. We were able to score some runs. It’s always good when you get some runs of support.”

Having met Hiram Burgos on more than one occasion, I’m impressed by him. He’s a humble, grateful person who really appreciates the opportunity that he’s earned through impressive play.

Those five runs came courtesy of some opportunistic offense who capitalized when Chicago defenders made errors. Officially there were three errors awarded in the game and they directly led to the Brewers scoring a pair of runs in both the fifth and sixth innings.

The other run on the day was a no doubt solo home run off the bat of the white hot Jonathan Lucroy in the bottom of the second inning. Early runs can be crucial in helping a young pitcher settle in, so leave it to Burgos’ batterymate in the game to get it done.

As for what’s next, Burgos wasn’t sure other than that he’s coming to Miller Park tomorrow. Roenicke also said that it needed to be looked at to determine whether Burgos could move into the bullpen between now and the next time the team requires a fifth starter, which is April 30th. Another possibility, though less likely from the sound of it, would be to not skip the turn when it could come up next. The third option would be to send Burgos back to Nashville where he’d make his next start and perhaps call up a relief pitcher for the next 10 days.

Roenicke said that they talk about it on Sunday to “see where we are and what we want to do.” Roenicke admitted that the chance exists to not keep Burgos up for the next week and a half.

But those are decisions for the management to make. For the players, a crisp victory in under three hours sends everybody home happy.

Well, maybe not the Cubs.