Welcome back to “Brewers By the (Jersey) Numbers”, my annual countdown to Brewers Opening Day by way of the numbers being worn in Spring Training by 40-man rosterees and many non-roster invitees as well. 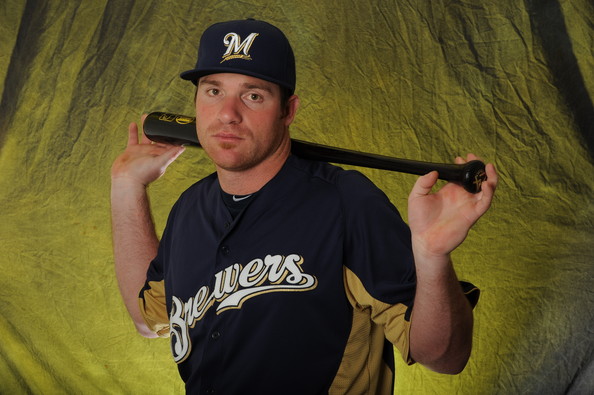 Last night on Twitter, I asked the masses whether or not they’d want today’s column to even be written given that there isn’t exactly a whole lot to discuss. The responses were mixed, but I decided to do it anyway because he’s still on the 40-man roster today and there’s at least something to discuss even if it isn’t how I think he’ll perform in 2013. That said, this will be a fairly short post.

First of all though, this time last year Mathew Lawrence Gamel was finally getting his shot. Prince Fielder followed his wallet to Detroit (don’t infer bitterness from that), and there was a wide-open position at first base which just so happened to be a position Gamel had spent some time learning in the minors in 2011. It’s almost like someone was anticipating Fielder’s departure. Zany idea, I know.

Gamel had an okay Cactus League in 2012, displaying some power be dropping six “Matomic Bombs” (a phrase I coined for the occasion of a Gamel home run) despite only hitting at a .238 clip with a .324 on-base percentage. Still, he came to camp healthy and in the best shape of his life after re-dedicating himself to his craft in the preceding off-season.

Opening Day 2012 came and Gamel trotted out in the starting lineup for the first time in his career. (“I remember…because I was there.”) Gamel went 2-for-4 that day with a run scored and everything was off to a great start.

May was far less kind.

Playing in San Diego, Gamel was chasing hard after a foul ball when the ACL in his right knee would give out. Gamel crumpled to the field and the worst was immediately feared by Brewers fans. Gamel was done for the year and had surgery on May 22nd to repair the injury.

Guys like Travis Ishikawa and Taylor Green would fill in at first base for a little while but eventually the move was made to have Corey Hart fill in there as the regular starter.

Gamel worked hard at his rehab and, by all accounts, was healthy and exactly where he should have been as late as when he first reported to camp. His knee went through a normal checkup and graded out fine. The other good news for Gamel on a professional level was that the man who took over at first base was going to be missing the first month or so of the regular season so Gamel had a starting job waiting for him again.

Then, the unluckiest guy had another black cat cross his path. He began working out at camp but was scratched from team workouts one morning after he tweaked his knee.

It was on February 18th when manager Ron Roenicke delivered the news that Gamel’s surgically-repaired ACL had suffered what is known as a “failure”. ACL repairs do fail around 10% of the time in life anyway, but Gamel’s was of particular peculiarity because the ligament didn’t re-tear at one end or the other but in the middle. It just snapped in two. What happened to Gamel is rare.

His 2013 is over before it ever truly began and his months-long rehabilitation of his knee was for naught. He had to start over and is ironically scheduled for surgery today to again repair his knee.

Gamel was in unexpectedly calm spirits in the days following the injury. He knows it happens and that it was unlucky but he realized that being upset about it wasn’t going to help him overcome it.

But the bottom line for Gamel’s career is that his time in Milwaukee as a Brewers might end when he’s given a clean bill of health.

After the 2013 season, Mat Gamel becomes eligible for arbitration. A player’s first year of arbitration eligibility sees a significant spike in salary. There have been many players over the years non-tendered in this situation. Their performance and production simply don’t warrant the salary for a team with a relatively limited budget like Milwaukee.

So, after years of being unable to breakthrough or stay healthy enough, Gamel could be jettisoned and forced to sign a minor league deal with another club in order to prove his health and his ability to contribute in an entirely new environment with an entirely new organization.

There are some fans who won’t mind that and others will probably cheer it, but the fact remains that all Gamel did throughout his minor league career was hit. He was the organization’s top prospect for a couple of years but simply couldn’t put it all together.

If Gamel returns to Milwaukee, I would think it would be under the circumstance of a very small raise, something Gamel would have to agree to. Furthermore, Gamel’s role on this team as a starter is probably done. Even if Hart leaves in free agency after 2013, the Brewers have a possible replacement in Double-A Southern League MVP Hunter Morris — who will be starting the year in Triple-A Nashville — to consider for the job as well.

Just something to keep in mind going forward as the 2013 regular season gives way to the 2013 postseason.