Feels like forever since we’ve had a new entry into “Brewers By the (Jersey) Numbers”. That’s what happens when you go through the mid-30s in numbers. Bench coach Jerry Narron and first base coach Garth Iorg wear 36 and 35 respectively. Rollie Fingers has 34 taken care of. After losing Eric Farris to the Seattle Mariners in December, John Shelby grabbed 33. If the subject of today’s profile hadn’t come in this year, 32 would belong to Brewers hitting coach Johnny Narron. Then again, had the Brewers not picked up any new bullpen arms this off-season, this series would still be sitting dormant until Carlos Gomez at 27.

So, in a completely self-serving way, there’s your silver lining to the Brewers bullpen woes. We’ve got Burke Badenhop tomorrow at 31 and today, wearing #32 throughout Spring Training and into the regular season is… 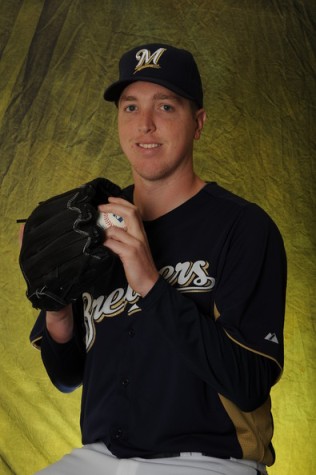 A veteran of parts of eight seasons in the big leagues, Thomas Stephen Gorzelanny debuted as a September call-up by the Pittsburgh Pirates in 2005. He was just 23 years old at the time and earned his call-up after just under two full years of Minor League service time following his being selected in the second round of the 2003 First-Year Player Draft by Pittsburgh.

The left-hander worked exclusively as a starting pitcher in the big leagues after being recalled again for a July 1, 2006 start. He pitched well in 2006 and 2007 before struggling mightily to begin 2008 to the tune of a 6.57 ERA. He was optioned back to the minor leagues after a July 4 start for just over six weeks. It was the beginning of the end of Gorzelanny’s tenure as a Pirate.

He was optioned to the minor leagues to begin the 2009 season and when he was recalled he shifted into the bullpen for the first time. He made nine appearances and pitched just okay out of bullpen before being optioned back to the minors but it was apparently good enough that the Chicago Cubs acquired Gorzelanny as part of a trade with the Pittsburgh just prior to the 2009 trading deadline.

The Cubs utilized Gorzelanny as a swingman for the balance of 2009, but very deliberately was first a starter, then was moved to the bullpen before finishing out as a starter due to necessity more than anything else. In 2010, Gorzelanny made nine starts, then pitched out of the bullpen for a month making six appearances before returning to the rotation for 14 more starts. He lost his rotation spot once Carlos Zambrano was healthy enough to return. Ironically, it was a suspension to Zambrano (and continued poor pitched by Randy Wells) that allowed Gorzelanny to rejoin the rotation. He missed three weeks because of a hairline fracture in the pinky of his throwing hand after being hit by a comebacker in a September 1st start but finished the year healthy.

Following the 2010 season, Gorzelanny was eligible for arbitration and in an effort to both save money and get younger still, the Cubs put Gorzelanny on the trading block. Eventually, he was traded by the Cubs to the Washington Nationals for a trio of farmhands.

Gorzelanny went to camp in 2011 in a competition for the fifth spot in the Nationals rotation. He won the job and made fifteen starts between April 9th and July 23rd but he missed nearly a month therein with elbow inflammation. After twisting his ankle and a poor performance upon returning, Gorzelanny was shifted to the bullpen and allowed just six runs the rest of the season over 22.1 IP across 15 appearances, 11 of which were scoreless appearances.

A non-tender candidate as he was still eligible for arbitration, Gorzelanny agreed on a one-year deal with the Nationals to remain in D.C.

Normally I don’t go into all of that about a player. You don’t need a career synopsis of how he reached 2012. I did it for Tom Gorzelanny for two reasons. First, he’s new to the Brewers so it’s a good career history lesson. Second, and more importantly, I wanted to illustrate just how he ended up as a full-time bullpen arm in 2012.

Now being viewed strictly as a reliever/long-man, Gorzelanny wound up making 45 appearances for the Nationals in 2012. His final one was a spot start as Washington was setting up their postseason rotation so Gorzelanny entered 44 games out of the bullpen. He posted a 2.90 ERA as a relief pitcher, handing long outings and shorts ones equally well. He only allowed multiple earned runs in three appearances, only one of which was under 2.0 innings in length.

All told, Gorzelanny had a very good season. He twirled 28 scoreless outings and, if you take away a six earned run effort on April 19th (which you don’t, but if you did), Gorzelanny had a 2.11 ERA out of the bullpen for the N.L. East Champions of 2012.

Then, inexplicably, Gorzelanny was non-tendered by the Nationals at the end of November. Maybe they needed the extra spot on the 40-man roster to protect someone from the Rule V Draft? Regardless, their loss will be the Brewers gain as Milwaukee and Gorzelanny agreed to a two-year deal worth $5.7 million guaranteed.

As I wrote back when the agreement was first making its way into the press:

As with many left-handers, perhaps Gorzelanny has taken a while to find his best role and really come into his ability.

The other thing Gorzelanny offers is a bit of coverage for the rotation should the need for a spot-start arise. He has started for the majority of his career but certainly appears much more suited to the bullpen. But he has the ability to go multiple innings which is another quality that Roenicke appreciates in his relievers. In fact, Gorzelanny recorded more than just three outs in over half (23-of-44) of his relief appearances last season.

Gorzelanny should prove to be an extremely useful piece in the Brewers rebuilt bullpen. He had an uneventful 2012 from a health standpoint, and the production speaks for itself.

Between Gorzelanny and Michael Gonzalez, the results should be much better and more consistent when Ron Roenicke calls down to the bullpen for a southpaw in 2013 than they were in 2012.