Certainly getting anxious for the season to begin, especially with the temperatures we’ve endured here in Wisconsin over the past couple of days.

Alas, there are 68 days to go but the good news is that there are still a boatload of “Brewers By the (Jersey) Numbers” articles to be posted.

Today’s subject joined the Brewers for the 2011 season, already a veteran of five minor league seasons to that point, but today he’s still just 25 years old. 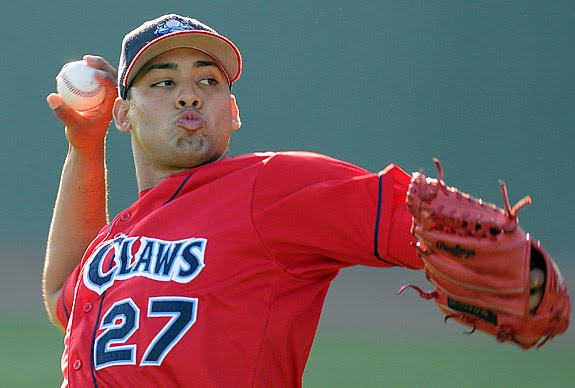 Jesus Enrique Sanchez is a 5’11”, 202 lb, right-handed relief pitcher. That has not always been the case during his professional career.

While I’m sure the height and weight have stayed relatively steady, Sanchez was originally in the New York Yankees farm system as a catcher. He made his pro debut in the Dominican Summer League in 2005. The next year he was traded as part of a package to the Philadelphia Phillies. It was with the Phillies where he would undergo his reassignment from receiving pitches to throwing them.

That move came in 2009 as a member of the Lakewood Blue Claws (hence the chose photo), the Class-A affiliate of the Phillies. They started Sanchez 26 times that year with promising results. In 2010 at Class-A Advanced nearly all of Sanchez’ peripherals improved but he was on the Phillies’ 40-man roster and they needed the space. On December 7, 2010 the Phillies released him.

After signing a minor league deal with the Brewers, Sanchez was assigned to Double-A Huntsville. He started 14 games along with making 16 relief appearances. The results were a mixed bag. He started his first nine games struggling to a 5.40 ERA. After switching to the bullpen for the majority of the rest of the season, he managed to whittle his ERA down to 4.91 but it wasn’t an encouraging campaign.

2012 was a different story though. Sanchez began the year in the Huntsville bullpen and the only change he made was when he was promoted to Triple-A Nashville’s bullpen at the beginning of July (a common time for promotions to happen in the minors). Combined between the two stops, Sanchez pitched to a 7-3 record with a 1.63 ERA in 52 games over 71.2 IP. His WHIP was 1.102 and while he wasn’t striking opponents out at an elite rate, 8.0/9 is still pretty good. When you factor in a K/BB of nearly three (2.91) and that he kept the ball in the yard (0.3 HR/9 overall with a “John Blutarsky” at Nashville), he was really an effective pitcher.

The time came in December where the Brewers would need to protect Sanchez from Rule V Draft exposure by means of rostering him on the 40-man. They chose to do so and Sanchez was subsequently invited to big league Spring Training as well.

Sanchez will begin the 2013 regular season where he ended 2012, in Nashville’s bullpen, but a strong showing with the Brewers’ coaching staff watching your every performance could go a long way in determining who gets the first call up to Milwaukee due to ineffectiveness or injury.

Coming with Sanchez wherever he pitches in 2013 should be the same excellently commanded low-90s fastball, solid change, and a work-in-progress slider. He reportedly commands all of his pitches well, which of course is a necessity when your velocity is a bit below average.

Sanchez is a candidate for some regression at Triple-A, but mainly due to the eye-popping totals he posted in 2012. He’s certainly in the Brewers plans at this point.