Pitchers and Catchers report in 22 days and Brewers On Deck, their annual winter fan fest, is only six days away, but today we sit a mere 10 weeks away from Opening Day.

And since we know that there are seven days in a week,  we’ll all remember from second grade multiplication that we are officially 70 days away from tailgating, lineup intros, and the best kind of bunting. 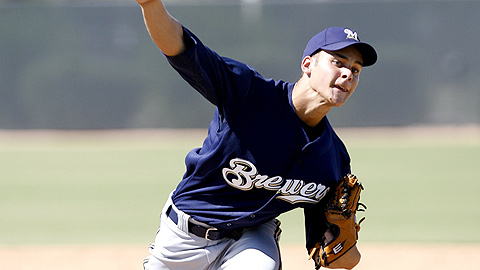 As an 18th round draft pick back in 2008 out of high school, Nicholas Bucci was drafted as a 17-year-old and began his professional career after his 18th birthday when he pitched in five Rookie ball games after signing his contract. The next year saw Bucci pitch mostly at Rookie ball again but he also made three relief appearances in Double-A at Huntsville, winning a game. The Brewers, who like to bring players along at a very deliberate pace, had Bucci the pitch the entirety of 2010 with the Class-A Wisconsin Timber Rattlers. It was there that he really began to show the results that he had been working toward.

At Class-A Advanced Brevard County in 2011, Bucci made 25 starts and posted an overall ERA of 3.84 in 150.0 IP. He was progressing along nicely in the system and getting his peripherals in check before he was sidetracked by way of a shoulder injury.

Bucci didn’t throw a pitch in a regular season game in 2012 until mid-July in a four-start rehab assignment with the Rookie ball team. He posted encouragingly strong numbers there like you would expect if he was healthy. Bucci’s first start back with Brevard County came on August 5th. He made six starts for the Manatees and posted a sparkling 1.99 ERA with a 10.5 K/9, 1.263 WHIP, but also a 4.3 BB/9 which is a number he must get back under control, if you’ll pardon the pun. His BB/9 in 2011 before his injury was 3.1 which is much better. The right-hander also took a turn in the Arizona Fall League in 2012, no doubt in an attempt to put some more innings on his arm after he missed so much of last season. There the results weren’t as promising but it’s an incredibly offensive-tilted league where pitchers tend to not head home unscathed.

The velocity on Bucci’s fastball has been reported to fluctuate a bit in the low 90s so it’ll be with control, command, and quality secondary pitching that Bucci will succeed and hopefully excel against better competition as he advances up the organizational ladder. If I had to guess, I’d say to look for Bucci to begin 2013 with Double-A Huntsville after camp breaks. It’ll be a nice step up in terms of that competition level.

The Brewers are looking for big things out of Bucci and so far he has fit the bill of projectability and advancement potential. 2013 will be an important season for the Canadian and it all begins with #70 on the back of his Brewers Spring Training jersey.

You can also follow us for commentary, breaking news, and all things Brewers: @BrewerNation