Another day crossed off on the calendar means we’re one day closer to Opening Day!!!

74 days away, to be precise, is where we find ourselves today and we’ll therefore be profiling the gentleman who will don the same number on his back during Spring Training.

That player is 25-year-old, right-hander… 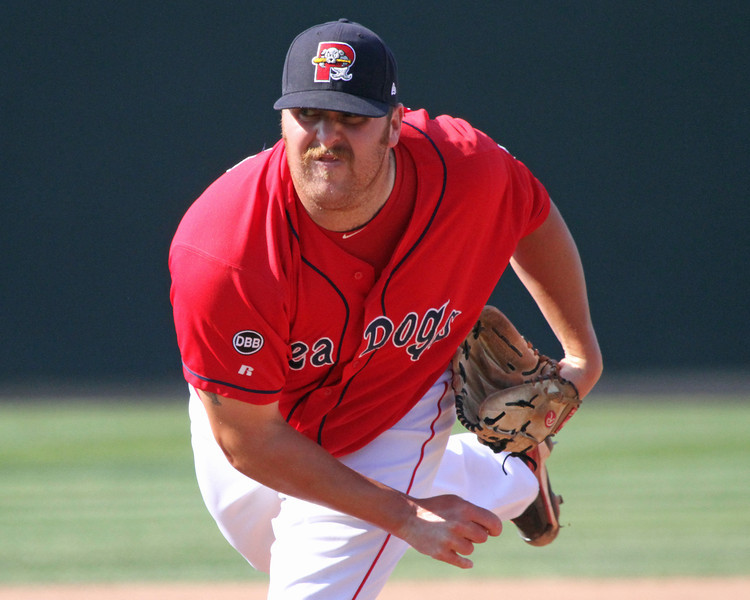 This is one of the early articles in the countdown which I have been most looking forward to writing. Not only because I projected on December 31st that Olmsted would make the bullpen out of Spring Training, but because I’m excited about his capabilities on the mound and what I’ve read about how many people are shocked that he was even available as a minor league free agent.

Olmsted (6’6″, 245 lb) was originally drafted in the 9th round of the 2007 First-Year Player Draft by the New York Mets. He played two seasons of minor league ball for them before his life took a series of major turns…down a couple of different and challenging roads.

First, during the fall instructional league as a Mets farmhand, Olmsted blew out his elbow and required Tommy John surgery to repair it. That’s not altogether uncommon anymore, but still requires roughly a year or rehabilitation which Olmsted did during the 2009 season. After reporting to extended Spring Training the next year, he was released in what he has called a “very discouraging” move. Olmsted went home and began what he thought was a post-playing career as an assistant pitching coach.

Olmsted would throw in that role as necessary and to stay in shape and one time a Japanese scout saw him and signed him to a minor league deal for the Softbank Hawks. Not the most ideal of situations, but he was being paid to play ball again.

Olmsted’s mother, who already was stricken with cancer, had lapsed into a coma and doctors weren’t optimistic on her prognosis. Olmsted left his team and flew home (ultimately requesting his release from his contract which was granted), to be with his mother. The doctors brought her out of the coma and they spent the final 23 days of her life together. He resumed his work as a pitching coach again and thought his career was over.

The next spring, however, there were tryouts for an independent league and Olmsted gave it a shot. A scout for the Boston Red Sox was in attendance and offered Olmsted a minor-league deal. It’s been paying off since.

However, the time came after the 2012 season that the Red Sox would have to either add Olmsted to their 40-man roster or he could become a free agent. They didn’t, he did, and the Brewers leaped at the chance to sign him.

As some examples of why the Brewers were happy to have him, and why many people were surprised at his availability, Olmsted made 13 appearances at Double-A last year. In 13 games, facing 76 batters, Olmsted gave up no earned runs, striking out 28 batters in 19.0 IP. His K/9 rate has been over 13 each of the last two years. He’s given up one home run over the past two years (90.2 IP), and kept his WHIP under 1.00 overall and at each stop along the way.

As for the opponents’ combined slash line? How does .167/.237/.220 grab you? Olmsted has only allowed 11 extra-base hits in 352 plate appearances over these last two seasons in Boston’s system. Sure, those numbers are coming at Low-A, High-A, and Double-A, but it’s certainly better than if he was allowing better numbers at those levels.

At this point, you may be asking yourself: “With which pitches does Olmsted go about retiring these hitters to such a effective end?”

(Side bar: If you asked yourself that exact question, you should look in the mirror. Am I standing over your shoulder?)

Olmsted features a big fastball that gets to 97 MPH. He also spins a low-to-mid 80s slider which he spots pretty well on both sides of the plate, according to reports. There’s also mention of a curveball which clocks in the mid-70s though it sounds like he primarily features the first two pitches.

Overall, Olmsted’s situation sounds a lot like how John Axford was found by the Brewers. Big arm, out of ball, last chance tryout, rediscovery. If Olmsted winds up contributing at the big league level, which certainly seems like a good possibility to happen, this could go down as a fantastic pick up by Doug Melvin’s staff when it’s all said and done.

So despite the high number of 74, place a keen eye on Olmsted this spring. With both John Axford and Jim Henderson (at least) leaving camp for a bit of World Baseball Classic play, there will be a bunch of innings available for someone like Olmsted to prove himself.