Welcome to the first official installment of Brewers By the (Jersey) Numbers as we countdown to Opening Day of the 2013 regular season!

After the bonus article was posted, I decided to skip #79 Anderson De La Rosa because, quite frankly, he’s really just a camp catcher at this point and there really isn’t anything particularly encouraging to point out about his career arc at this point. 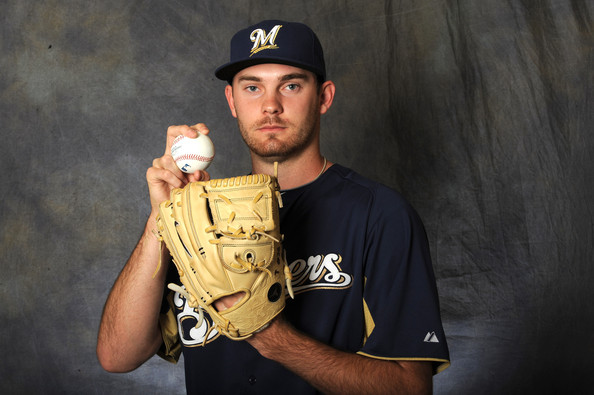 Taylor Heath Jungmann was the 12th overall selection in the 2011 draft and thanks in part to now outdated rules didn’t sign until very late in the season. So late, in fact, that he didn’t throw a professional pitch for the Brewers in 2011.

Following his invitation big league camp in 2012, Jungmann performed about as you would expect before his reassignment to minor league camp. He saw 2.2 innings of work over two games. He hit a batter, walked three, struck out two, and allowed five runs (four earned) on four hits.

His minor league season would be significantly better.

Last year, I wrote about Jungmann’s repertoire. I said that “he will look to improve upon what scouts have labeled three “plus” pitches. A fastball with plus movement which has been thrown between 91-97 mph, even touching 98 mph, though tends to sit in the 93-95 MPH range. A curve, with a hard and tight 11-to-5 break. Along with a changeup. His command is usually considered average and he occasionally gets too much of the middle of the plate. Jungmann has demonstrated outstanding control though, throwing strikes and not hurting himself with walks.”

Those seemed to be tendencies which held true in 2012. He walked too many (2.71 BB/9), hit too many (though that’s partly a result of learning to work off the plate more than he did in college), but kept the ball in the yard well and induced nearly twice as many groundouts as fly ball outs. He needs to keep that ground ball rate up because, quite frankly, he doesn’t strike that many out.

Jungmann was just interviewed on a local radio station in the Milwaukee market and he was asked about his goals for the upcoming season. (You can listen to his interview here. It the last segment of the show.) Among the goals listed were maintaining his changeup and improving on his curveball. That’s a bit of a difference from when he was first drafted out of the University of Texas when it seemed more like his curveball was his second-best pitch.

Based on the promotions/graduations in the system coupled with his success, look for Jungmann to begin the 2013 regular season assigned to the Double-A Huntsville Stars. It’ll be a good challenge for the talented right-hander and should go a long way in determining how soon we might see him throwing in Nashville and then ultimately Milwaukee.

Still only 23-years-old (he just turned such on December 18th), the track is laid out for Jungmann’s eventual ascent to the big leagues. He’s a smart pitcher, he knows his craft, and he’s much more interested in the process right now without worrying too much about the results. In other words, if he’s working on his curveball and gives up some hits because guys realize he’s throwing it a lot, he isn’t worried about those hits.

If you’re headed to spring training this year, keep an eye out for the big 6’6″ Texan with #78 on his back. He’ll likely be entering games out of the bullpen while in big league camp, but don’t let that fool you. His future success will come as the first man on the bump.