Welcome, fellow Brewers fans, to the first “Brewers By the (Jersey) Numbers” column for Series: 2013! Allow me to give you a brief reminder of how this works.

As we approach Opening Day on April 1, 2013, I will be reviewing/previewing players in the the Milwaukee Brewers organization that are either on the 40-man roster or have been given an invitation to big league camp in Spring Training. I won’t do every single non-roster invitee, but I plan on writing up most of them at this point. Basically, though, this is a way to focus on the individual members of the Milwaukee Brewers organization.

Let us depart on our lengthy journey of discovery and remembrance!

First let me say that I realize that bonuses usually come at the end. In this case, it simply doesn’t work out that way.

The reason for this bonus article is that four players were announced after the day on which they would have otherwise had their individual article written and posted.

The players in question are Rafael Neda, Kentrail Davis, Hunter Morris, and Adam Weisenberger. They were assigned jersey numbers 94, 93, 92, and 91, respectively.

These won’t be in-depth profiles of these players but I wanted to make sure you knew a little something about them before camp opens and you see their names popping up in box scores.

Rafael Neda is a 24-year-old catcher who stands 6’1″ tall and weighed in last year at 215 pounds. He was born in Obregon, Mexico and played collegiate ball at New Mexico before the Brewers drafted him in the 10th round of the 2010 First-Year Player Draft.

He has never been touted for his bat which is reflected in his career minor-league slash line of .220/.314/.271, but he calls a good game and the pitchers I’ve spoken with that play with Neda all enjoy throwing to him. He is a good leader on the field and, presumably, in the clubhouse as well.

Neda played the entirety of the 2012 season at the Class-A affiliate Wisconsin Timber Rattlers based in Appleton, Wisconsin. The Timber Rattlers wound up winning the Midwest League Championship in 2012 and Neda’s gamesmanship played a large part in that championship run. While his catching skills helped a number of his early season teammates get their promotions up to Class-A Advanced Brevard County, his leadership helped hold the team together with new, young faces as they marched to postseason sucess.

I covered a game as a credentialed media member up in Appleton for one game (column here) back in June of last year and Neda was the offensive hero. He hit his first (and still only) professional home run during a rally inning and then won the game in extra innings with a walk-off single with the bases loaded.

Most young ballplayers in the minor leagues experiences flashes like that. It’s the gentlemen who can stack flashes together and reshape them into consistency that move up the organization and hopefully one day become Major League ballplayers.

To be blunt, Neda doesn’t fit the profile of someone who will ever excel enough behind or in front of the dish to become a big league regular. I have no doubt though that he’ll be a quality contributor this spring as pitchers hone their craft and that Neda won’t be going anywhere out of the Brewers system for as long as he wants to play. The term “organization guy” gets thrown out as a negative a lot of the times I see it used to describe someone, but in Neda’s case if that’s what he becomes, I think that the Brewers minor leaguers he plays with along the way will be that much better for it.

An outfielder from Mobile, Alabama by way of the University of Tennessee, Kentrail Latron Davis (5’9″, B/T: L/R) reached the Double-A affiliate Huntsville Stars in 2012 following a strong showing in the 2011 Arizona Fall League.

Davis, 24, was originally drafted out of high school by the Colorado Rockies in 2007 but chose to go to college instead. The Brewers then picked him in the supplemental first round in 2009 (39th overall).

He struggled out of the gates in 2010 after being assigned straight to Class-A Advanced Brevard County to begin his professional career. After finishing out the 2010 season with the Timber Rattlers, where he hit very well, Davis spent all of 2011 back at Brevard County. His prospect status was in some doubt though after a lackluster season at the plate where he hit only .245/.317/.361 in 565 plate appearances. He was very good when he reached base though, stealing 33 bases in 41 attempts (80% success rate), and scoring 76 runs.

In 2012, Davis was a Huntsville Star and perhaps being home in Alabama helped him relax. He finished the year with a .274/.357/.404 line in 498 plate appearances over 122 games. He has a ways to go before he’ll be under consideration for a 40-man roster spot (let alone a 25-man one) but if he can improve his vision and discipline he has the chance to perhaps contribute one day in a reserve OF role at the big league level.

Of note: Davis is ranked as the 11th best prospect in the Brewers system entering 2013 by MLB.com’s Jonathan Mayo.

Jeffrey Hunter Morris had quite the 2012 in a year which he needed it the most.

After an inauspicious start to the year, Morris, 24, turned on the power in a big way in the second half of the season. He finished with the following statistics:

Those numbers were good enough to win the Southern League’s Most Valuable Player Award! But the accolades wouldn’t stop there as Morris was also awarded the Minor League Gold Glove for first basemen. Yeah, out of all of them, spread over 10 “domestic-based, full-season leagues”, Morris was named the best fielder as his position.

Make no mistake though, Morris was drafted in the 4th round of the 2010 First-Year Player Draft out of Auburn University for his bat which is what will get him to the big leagues should he achieve such, but his developing defense would be a nice boost to his chances.

Morris has things that are often looked for in a prospect (he’s 6’2″, 200 lbs, for what it’s worth), but he also has some reports about the things that could hold him back. But if this power remains the norm and he can increase his walk rate, the Brewers might be looking to add his left-handed swing and glove to their everyday lineup as early as 2014.

In a recent radio appearance, Brewers GM Doug Melvin said that they’re going to watch Morris closely this spring as their evaluation of him very well could impact their long-term decision about the future of the now incumbent 1B Corey Hart in Milwaukee who is only signed through the end of the upcoming 2013 season.

Of note: Morris is ranked the #7 overall Brewers prospect by MLB.com, and is #4 on the overall list of first base prospects in the minor leagues entering 2013. 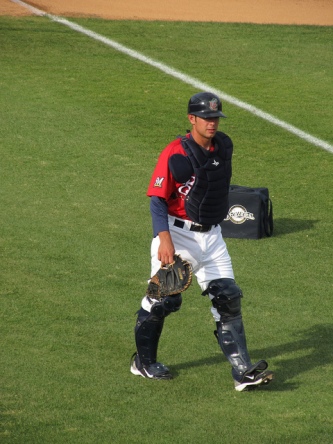 After being chosen as the Best Defensive Catcher in the Brewers system by Baseball America, Adam Robert Weisenburger will enter big league camp in 2013 much like the rest of the players in this article. That is to say that none of them stand a chance of breaking camp with a plane ticket to Milwaukee in hand.

Don’t let that dissuade you from understanding how a guy like Weisenburger will be spending his time before being reassigned to the minor league fields at Maryvale.

Catching bullpens, working with some pitchers he’ll likely meet up with down the road in the 2013 MiLB season, and other things in preparation, but with starting big league catcher Jonathan Lucroy leaving camp to play with Team USA in the 2013 World Baseball Classic, there will be plenty of innings behind the dish in actual big league Spring Training games.

It’s why Neda is there. It’s why Weisenburger is there. It’s also why the Brewers have invited non-roster catchers Blake Lalli and Anderson De La Rosa and Dayton Buller to camp. To be clear, however, if Weisenburger lives up to the billing as the best defensive catcher in the system than he could see the bulk of the game time given to these youngsters.

Weisenburger split time in 2012 between Class-A Advanced Brevard County and Class-AA Huntsville. While he didn’t hit particularly well at either stop (less so as the competition got tougher), his ability to receive, throw, and call a game are what could further his advancement in the system. He’s an interesting case to watch this spring in whatever game action he’s afforded.

Physically, the Minnesota native is 5’10” and listed at 185 pounds. He bats right-handed. Weisenburger was drafted in the 34th round of the 2011 First-Year Player Draft out of Miami University, in Ohio.