Doug Melvin spoke to Tom Haudricourt this morning after free agent pitcher Shaun Marcum said on the radio yesterday that he’d be open to returning to Milwaukee.

(You can read about that part of the conversation on Haudricourt’s blog.) 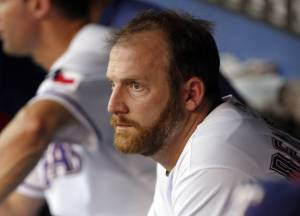 Photo courtesy of John F. Rhodes – taken during the fourth inning of a MLB baseball game against the Baltimore Orioles in Arlington, Texas on Monday, August 20, 2012.

I’m posting a new blog today to expound on an additional point revealed by Melvin. He confirmed that he had made an offer to free agent pitcher Ryan Dempster but that based on reports and that he hasn’t heard back from Dempster’s agent since, it appears to Melvin that Dempster won’t be coming to Milwaukee.

In the blog post, Haudricourt says that Melvin confirmed it was a two-year offer, but on Twitter, the Brewers beat writer appeared less certain about the terms:

In my Brewers Blog about Shaun Marcum, GM Doug Melvin confirmed he made an offer to Ryan Dempster, presumably for two years.

I asked a source and he told me that the offer to Dempster was officially for two guaranteed years with a club option for a third year. The guaranteed dollars, however, were not competitive to what Dempster reportedly turned down from Boston (2yr/$25 million) and Kansas City (2yr/$26 million) last week.

I suppose the thought process would be that a third year option (with appropriate buyout price) might allow for a lower AAV over the guaranteed two years if nobody else stepped up to offer a guaranteed third year. While there has been no indication the Boston has gone to a third guaranteed year, it could be what got the two sides to the point of being “close” which I first saw reported this morning by FOXSports.com’s Ken Rosenthal.

So, to summarize, it looks like Ryan Dempster will not be donning a Brewers uniform to begin the 2013 season.

***UPDATE: Ryan Dempster is reportedly in agreement (again via Ken Rosenthal) on a two-year deal with the Red Sox for $26.5 million.***

Knowing what I know about the offer, that’s not a shock, but it’s also something I’m more than comfortable with. The Brewers have a budget in mind, made Dempster an offer that they felt was palatable based on that budget and their expectations for the following two seasons, and weren’t going to put themselves in a position where they felt that they were doing a disservice to the long-term view of this franchise.

They may not have gotten their man, but in forgoing increasing their offer to guarantee a third year to a player who they felt wouldn’t properly fulfill that obligation they feel they will still come out ahead in the long run. I don’t disagree with that philosophy at all.

To update on the most recent Hot Stove Report focusing on J.P. Howell, I was also told that the Brewers have made no further advancement on Howell at this time. I wasn’t told why and they certainly still could. Just wanted to pass that along.