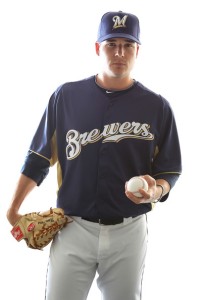 The Milwaukee Brewers announced today that they will not be tendering a contract to Manny Parra in advance of tonight’s deadline to do so. This mean that Parra, 30,  will become a free agent tomorrow.

The writing has been on the wall, as they say, for some time regarding the likelihood of this move. I wrote about it earlier this week (which you can read here: http://wp.me/p1wIvV-98Nx) and said that Parra was the likely guy to be in trouble.
No doubt exists that Doug Melvin attempted to trade Parra once they knew that they wouldn’t be tendering him a contract, but the same reasons that the Brewers used to justify cutting ties are the same reasons that every other team would use to not give something up for him.

The Brewers have shown a ton of patience with Parra in the hopes that he would develop into at least a capable bullpen option who could be used in more than just LOOGy situations after he floundered in the rotation.

That being said, Parra has been an overall success story in a manner of speaking for the Brewers. Originally a 26th round draft pick, those aren’t the kinds of guys you usually expect to reach the major leagues let alone have any kind of discernible impact.

As for the situation his non-tendering leaves the Brewers in? They now have no left-hander in the bullpen again (just as in 2011). The 40-man roster will now stand at 38 with Parra’s forthcoming departure.

There are also currently four jobs up for grabs in the Brewers’ bullpen. Only John Axford, Jim Henderson, and Brandon Kintzler are set to return from 2012’s group.

***MLB.com’s Adam McCalvy spoke with Manny Parra about the non-tendering. Some highlights follow but for McCalvy’s full column with all of Parra’s quotes, click here.***

“I prepared myself for it, so more than anything I’ll miss being considered a Brewer, because I’ve been one for so long,” he said. “Not only that, but I have so much respect for Doug [Melvin] and Gord [Ash] and the way they do things. They’ve given me so many opportunities.

“At the same time … being a starter — a failed starter, in my opinion — I feel like no matter what I did, I was always being compared to what kind of a starter I was. … I’m excited to move on and improve and be a better player.

“I just keep telling myself I’m a late bloomer. I always have been in my life. I’m 30 years old now, but I’m just going to remain positive and believe that I’m going to keep getting better. What else can you do?”

He added: “I like the idea of being able to sick with the organization you were drafted by for as long as you can and reward them for giving me the opportunities. But there comes a time when you have to move on, and this is it.”