The Hank Aaron Awards were given out recently. One winner from each league is chosen and, prior to Game 3 of the World Series, the respective American and National League winners of the award were honored in an on-field ceremony at Detroit’s Comerica Park.

Fittingly enough, the home team’s third baseman, Miguel Cabrera, was selected as the winner in the American League. He earned the Triple Crown in the AL which no doubt factored in heavily.

The winner in the National League was also present, of course, but because he was set to play in the game that evening as well. Buster Posey of the NL Champion San Francisco Giants was named as the winner for the senior circuit, much to the confusion of yours truly. 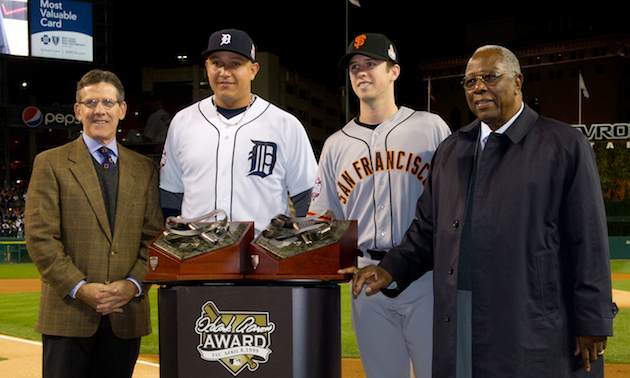 Don’t get it twisted, Buster Posey had a fine year. A year which arguably saw him as the most valuable player in his league. But “value”, as it is argued in baseball circles, is not the goal of the Hank Aaron Award. The Hank Aaron Award is described thusly, as lifted from MLB.com:

“This coveted honor is awarded annually to the best overall offensive performer in both the American League and National League. Originally introduced in 1999 to honor the 25th anniversary of Hank Aaron breaking Babe Ruth’s all-time home run record, the Hank Aaron Award was the first major award to be introduced in 30 years.”

Did you catch that part about the “best overall offensive performer”? It’s right there in the first sentence. If you missed it, go ahead back and read it again.

Buster Posey, ladies and gentlemen, was not the National League’s best overall offensive performer in the 2012 regular season. He “won” the batting title after his teammate Melky Cabrera asked to be made an exception to the qualifications of the title, this is true, but as we all know from 2011 simply winning the batting title doesn’t garner you the Hank Aaron Award. Otherwise Jose Reyes would have been shaking hands with Hank Aaron instead of Matt Kemp.

So how exactly does one get selected as the “best overall offensive performer” anyway? Well, part of the problem is that there isn’t anything “exact” about it.

As currently constructed, fan voting counts for 50% of the vote while a five-man panel that consisted of Aaron, and fellow Hall of Fame members Tony Gwynn, Paul Molitor, Joe Morgan and Robin Yount make up the other half.

We all know after the debacle that was the All-Star Game voting this year that Giants fans know how to stuff a ballot box, but the fact that the fans can even influence this award at all is ridiculous. Fans are biased.

“But aren’t you just being a biased Brewer fan by writing this in the first place?”

Fair question, but that helps make my point. In it being a necessity to have evidentiary support for my point as to maintain some semblance of neutrality in this matter, the statistics do all the backing up needed.

Here are the full-season stat lines for both Braun and Posey. See if you can guess which line was produced by which player.

Again I’ll state that Posey, Player A above, had a terrific offensive season. He really did. However, when comparing Posey’s line to that of Braun’s (yes, Player B), how can you argue superiority for the Giants’ catcher?

The biggest issue is that we’ll never know how close it was nor how the voting played out among the five-man panel, but in the opinion of this avid baseball fan, there are shenanigans afoot.

It seems obvious that the collective consciousness of certain individuals is still flawed as it is at best heavily influenced by a scientifically-invalid urine sample from 12 months ago.

That’s a shame and those men who have allowed it to cloud their judgment, influence their analysis, and apparently ultimately impact their award voting should be so ashamed.

Those last two sentences apply even more so to the BBWAA members charged with honoring a player as most valuable.

We’ll just have to see where the winter takes us and when another year of excellence is produced by a certain Brewers superstar, perhaps the fog of confusion can begin to dissipate.

For now, the results of the 2012 Hank Aaron Award voting has left me under that same fog’s veil.