We’re nearing the three week mark of our countdown to Opening Day. Today is a mere 22 days away from April 6th.

It’s a major sports day on the calendar this year also. The first day of the NCAA Division 1 Men’s Basketball Tournament, NBA trade deadline, NFL free agency is in full swing (Mario Williams and Calvin Johnson got HOW much??). Yeah…there’s a lot going on.

But it is today which brings the focus of “Brewers By the (Jersey) Numbers” to an outfield prospect that finally saw time at the big league level this past September: 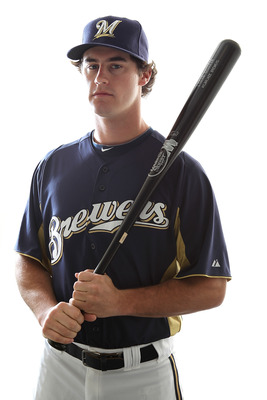 I interview Logan Edward Schafer for the blog last year, right around this time in fact. Here is a link to that interview. It gives some insights into him, including a self-scouting report and also talks about how he was drafted in three separate years before finally agreeing to a deal with the Milwaukee Brewers.

I suggest that you click the link above, read that and then come right back here to finish up this post. It’ll be here when you get back.

I want you to read that because I don’t want to spend time rehashing his injury history and whatnot.

In case you didn’t click, Schafer has been stricken with the injury bug a few times in his minor league career, including suffering a broken thumb last spring.

Once the thumb injury healed, Schafer went on to in play at three levels of the minor leagues, though his nine games at High-A Brevard County would be best described as a rehab assignment. Still, he hit .306 there over 36 at-bats.

As his bat continues to blossom, it’s his defense which (as he told you himself in that interview) has always been his best tool.

In 96 games defensively (all as a center fielder) in 2011, Schafer logged 812.0 innings, and had 241 total chances. He recorded 227 putouts and had 11 assists, including three double plays. Schafer was also involved in a triple play which got him some airtime on the four-letter network’s highlight show. His Range Factor was also the best of his career and clocked in at 2.48.

Schafer uses his 6’1”, 180 pound frame to glide through the outfield with tremendous ease. He is currently 25 years old which means that his peak is definitely right in front of him.

Brewers General Manager Doug Melvin realizes this as well, saying that despite the fact that the Brewers currently have great depth at the centerfield position, he is not going to be trading Schafer. That’s music to the ears of many Brewers fans. It’s also nice to hear that despite having to trade away Lorenzo Cain in the Zack Greinke deal, the team still has a young option that might be able to play every day in the near future.

What’s more, Schafer is hungry to succeed. He played in the Arizona Fall League for the Brewers and hit over .300 again with an OPS of .812 in the desert. He works hard and will continue doing so in order to realize his dream.

As for the beginning of 2012, unless Corey Hart’s surgically-repaired meniscus forces him to begin the season on the disabled list, chances are good the Schafer will head to Nashville to once again fill the starting centerfielder role in order to play every day and stay ready. If Hart doesn’t miss any regular season time, there simply isn’t any room in Milwaukee’s outfield as currently constructed.

Ryan Braun, and the platoon of Nyjer Morgan and Carlos Gomez will start in the outfield alongside Hart, with Norichika Aoki likely being the primary backup at all spots (assuming the Japanese import’s bat gets going by the end of Spring Training).

Schafer, on the other hand, is having a tremendous Spring Training, for what it’s worth. In 18 at-bats prior to today, Schafer has 10 hits including three doubles and two triples. He has scored three runs and driven in three more. He’s also swiped one base while being caught once.

Yes, the future is bright for the native Californian product from Cal Poly San Luis Obispo. It just seems that he’s currently in a bit of the situation Mat Gamel has been dealing with for years: no spot to play yet on the 25-man roster.

But as in Gamel’s case, for Schafer it only seems to be a matter of when an opening presents itself as opposed to if it will.

One thing which you can be sure of is that when opportunity comes knocking, Logan Schafer will be ready to walk through the door.